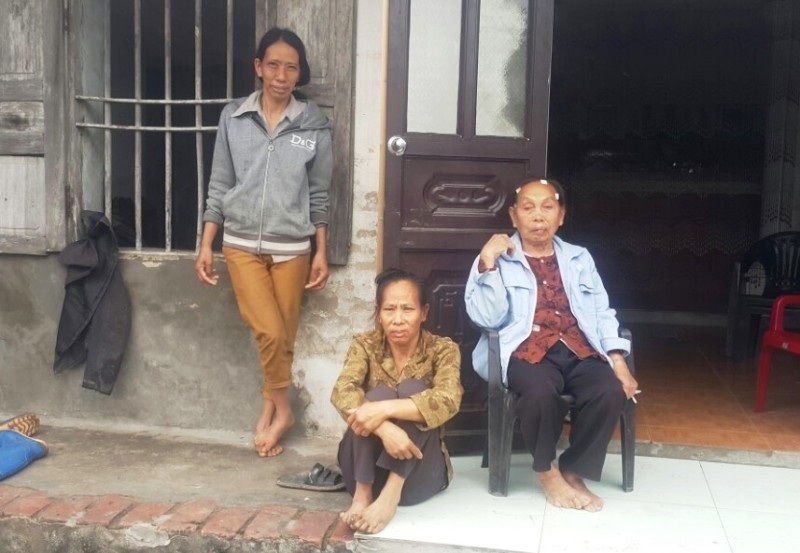 Xom "go to the street to meet crazy people" is the name of the people in the area, who gave the neighborhood 8, Khanh Tien county, Yen Khanh district, Ninh Binh province. In this small hamlet for many years in this area with less than a square kilometer people are always suffering from mental illness.

The house has two generations, which are crazy, the whole family is crazy or there are children in the house, but up to 3 people get sick … it's not weird.

It lies on the River Day, about 20 kilometers from Ninh Binh, about ten kilometers from Yen Ninh, Yen Khanh, but the province of Hamlet 8 (Khanh Tien) is dark, strange to the dark. In the quietness of a pure rural settlement, sometimes in this strange neighborhood, the sound of sound is heard. Shouts of crazy men or sigh boredom, mourning for the suffering of people with relatives who have crazy illnesses.

For this reason, poverty and suffering were held up by people. They live throughout the year with diseases, old age, madness, children are crazy, so most households are "poor households who are being maintained".

She talked about the story of my neighbors, Mrs. Nguyen Thi Chinh, secretary of the village branch 8, but regretted: "This is the most and the poorest, the most crazy person, not only in the municipality, but also in most districts again. We go to the street, to catch the mad people. "

Also, according to the party secretary, families with 3, 4 people are crazy, two generations are crazy in the neighborhood is not uncommon. Their life is all year long, bitter, miserable, extremely bad. "Just seeing their life scene is a tear", Mrs Chinh was sad.

Among the crazy families in Hamlet 8, the Nguyen Thi Thoi family (aged 73) is the first special mention. Because in the era of "near a land far from heaven, now it is rare", children and grandchildren should adopt themselves in order to live peacefully in the last days of life. She had to eat salads every day when she raised 3 children with mental illness.

When asked about her family's situation, Mrs Thoi was sad and painful. His tears seemed to be exhausted, only a little, that he fell to his black faces, full of legs. She whispered and lost her voice: "Now I am exhausted, like a windmill, like ripe bananas, who can turn off and fall off at any time. I'm dying, and the kids are crazy and crazy in a world who do not know who is raised?"

Thoi's eldest child was 46 years old and her 34-year-old child. A poor woman who was dissatisfied said that when she was born, a great girl, how great a mental illness she sold her family's products when she came here and fled. When he later gave birth to two children, he did not let go and continue to condemn his family to suffer from the situation of three children who live the life of "people who do not come out".

Four children lost three crazy children, making Thoi's life more similar to his name. All day and year she had to work hard to support her children, but she had not yet had a break. At all times she had to worry and care for the children of the village all day and devastated, traveling around the village. "Where they want to go when they get home, they know they're alive," the 73-year-old looked at crazy kids.

The family Mrs Thoi was unhappy, but not far away, the Nguyen Thi Dao family was also extreme. She was mentally ill because she was not married, but she had 3 children from the wilderness. In it are two children who have crazy illnesses, like their mother, only one son is normal. Four mothers and a son continued to pretend to live together, like the lives of people who "swam in the cloud" in the world.

Share with Human intellectuals, Pham Thi Nga, Vice President of the People's Committee of Khanh Tien, said that the village of 8 is a special village in Ninh Binh. The most crazy people in the village are the most social, most often in the province. The reason why many people in the hamlet so far have no answers, we know only how many generations in the neighborhood are always crazy people.

Not only the circumstances of Thoi's family, Mrs Dao, but also in this village are still many families with people who suffer from mental illness. Many families with healthy people suddenly hated. People who are crazy with age have a little age, about 15 people with living crazy diseases, many people have died. Many families are extremely poor and sad. So in this poor village, poverty is getting worse.

"Hamlet 8 is one of the poorest villages in the community, the situation of people with mental illnesses has long since appeared, so far the number of people who suffer from illness has increased. The government is always watching the circumstances of families with this political goal so that they can rise in life , "Said Khanh Tien, deputy chairman of the People's Committee of the Municipality.