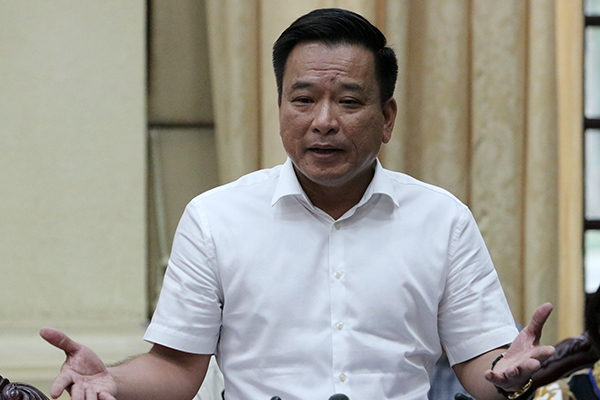 According to the Director-General of Hanoi Drainage Company Limited Vo Tien Hung, the flight of cleaning results to the Lich River is not the result of water discharge in the western lake, but due to rain.

At a meeting of the Hanoi Party's press conference yesterday afternoon, In Tien Hung, he informed that the discharge of water from the West Lake to the River To Lich influenced the testing of the Nano-Bioreactor Nano-purification.

Mr Hung has confirmed that the company has created maximum conditions for people, premises … so that the SEE will conduct testing in Japan. At the same time, it draws attention to possible problems, since the project is implemented in the rainy season.

"On the Lich River, both effects are high, if rain or water spills in the western lake or both. We warned that at the time, the Japanese expert and the JVE confirmed that it had no effect. We also recall why the source is the Hoang Quoc Viet source, but it is confirmed that it is guaranteed and unchanged, "Hung said.

According to Mr. Hunga, when she announced the release of water from the western lake on July 9, did not respond to the JVE side. Hanoi Drainage Company Limited dropped the water very slowly for 2 days without getting into the test area. But on July 15, the intensity of heavy rain flowed into the lever area.

The leaders of the Hanoi Drainage Company emphasized, not because of the discharge of water from the western lake, but also due to rain and rain, was not large and flooded into the test area.

He also confirmed that the company worked very well in the process of implementing the experiment, rather than saying that we had "broken" it.

"The public opinion said that we broke up, competed with the work, reported that we are not currently involved in the treatment of the To Lich River.

At a meeting on July 22, the SEE side confirmed that the recent test was the result of their intolerance, not thorough research, "Hung said.

He also informed Japanese experts and JVE companies, if successful, will give the prices, Hanoi City approves, "we need to transfer money to them".

There is no competition between these two companies

Regarding the above question, the SEE said that at a meeting with the departments of Hanoi, Nguyen Tuan Anh – Chairman of the Board of Directors confirmed that there is no competition. between the two companies.

Departments, agencies and units of the city have agreed on a SEE and the Japanese expert group will continue to pilot the treatment for 2 months. SEE is fully responsible for technology in the pilot process during the rainy season.

Tadashi Yamamura, President of the Japan Environment Organization – Trade, said that the company's dive company's judgment in Hanoi is not yet understood about technology and not about it. about how the rivers are judged.

"If carried out at the end of the source, the number of treatment devices must carry all the waste from 280 discharges into the river To Lich to 150,000 m3 / day and night, ie. 6 km instead of testing on 300m segment.

Therefore, it is impossible to estimate the processing capacity of the number of nano machines in this segment.

Therefore, pilot processing proves the performance of four nano-machines and Bioreactor tiles that need to be made at a new target break in terms of computing power on the 300-mm segment, "said Dr. Yamamura.

There is a solution not to rinse the test results

Explain why no piloting in the dry season is carried out, Dr. Takeba Akira, an adviser to the Japan Trade and Environment Organization, if piloting during the drought season in a low-flow situation is a special case. will not prove the ability to process technology when heavy rains occur.

A Japanese expert said that they now have a technological solution, so that the test results are not removed, even in the case of a larger water outflow from the West Lake than before.

The solution is to adapt the Bioreactor device, which is conceived as the construction of a "residential building" in order to "avoid the flooding" of micro-organisms and ensure that the results of tests are preserved in the future.

Japanese experts take into account the method during the rainy season when the outflow of water from the western lake should not be taken to the result of the piloting to clean the Lich River.