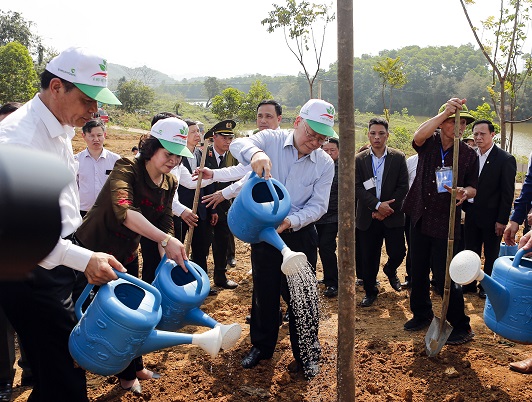 Speech at the ceremony, Secretary General and President of the State of Nguyen Phu Trong he was pleased to attend the opening ceremony of the festival "The Unconscious Tree for Uncle Ho", organized by the Ministry of Agriculture and Rural Development in Yen Bai Province – Yen Bai – a land with rich history, culture and networking.

The Secretary General and the President of the State recall: almost 60 years ago, on November 28, 1959, with a strategic vision, beloved President Ho Chi Minh wrote this post. Journal Nhan Dan With the title "Tet for planting trees", which analyzes the great importance and practical benefits of planting trees and causing forests to the state, the family and every citizen. The person stressed: "This is a bit expensive, but it has a lot of benefits"; "It is also a long-term, but gentle competition, in which everyone, from old to grandchildren, can participate enthusiastically." At the end of the year, Ky Hoi (1959) called on all people to enjoy the month of planting trees, called Tet for planting trees; advise people to persistently maintain "Tet for planting trees".

All the people who responded to the uncle Hoja 's complaint carried out the first tree planting plant near the Luna New Year (1960). Since then, the Tree Planting Tree in the words of Uncle has truly brought great benefits to the country and has become a good practice for our people in the coming lunar new year. Tree planting and afforestation has significantly contributed to the proactive prevention and fight against natural disasters, climate regulation, improvement of the ecological environment, beautification of natural landscapes, socio-economic development of the country. improving the material and spiritual life of people.

The Secretary General and the President of the State stated that our country is in the process of industrialization and urbanization. Every year the country has to devote a lot of space to industrial and urban development. Together with this process, the quality of the environment is also reduced to an alarming level; the effects of environmental pollution, climate change, global warming and rising sea levels are among the greatest environmental challenges for humanity in the 21st century.

In recent years, natural disasters and extreme climatic phenomena have been rising in many parts of the world, including Vietnam, with very serious consequences. Socio-economic development, together with environmental protection, the economical and efficient use of natural resources, has become a key requirement of every nation.

In such a context, the more we follow the instructions of Uncle Ho, the more often we see the need and the great importance of planting trees and causing forests. Planting of several trees will contribute to overcoming destruction, non-discriminatory forest exploitation, erosion prevention and flood restraint; The planting of several trees will contribute to creating a great potential for material wealth for the lives of every family and society. For cities, industrial centers, planting more trees contributes to limiting environmental pollution, while maintaining fresh air. "Obviously, this is a very important task," the Secretary General and the President stressed.

On this occasion, the Secretary General and the President of the State called on the entire party, the entire nation and the entire army, all levels, branches, places, all people and all people to engage enthusiastically in tree planting and afforestation; people planting trees, houses cultivating trees, planting trees, good trees; At the same time, it is necessary to raise awareness and take effective measures to protect forests, to prevent illegal logging, forest fires, illegal forest exploitation; increasing investment, using science and technology, creating mechanisms to support and promoting sustainable economic development of forests.

The Secretary General and the President are confident that this year with a new spirit, a new determination, "an eternal festival of planting trees thanksgiving to Uncle Ho" in spring pigs – 2019 will achieve many good results, contribute more taste to Vietnam for ever green, eternal and sustainable as a holy prayer Uncle Hoja: "Spring is the tree planting festival / Let's make the country more and more elastic".