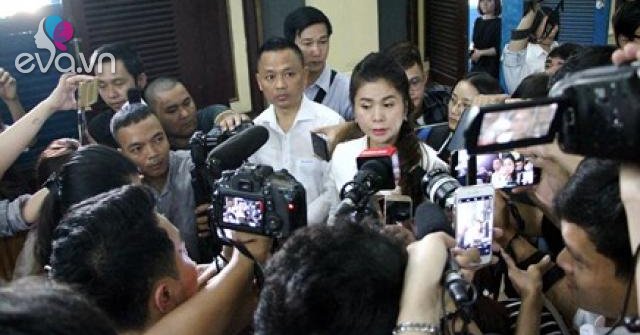 On 12 April, Ho Chi Minh VKSND stated that he sent documents to related units and parties to inform them of the protest in the direction of the cancellation of the first-instance divorce judgment between Mr Dang Le Nguyen Vu. and Mrs Le Hoang Diep Thao.

Ho Chi Minh City VKSND stated 11 reasons below, which he said was "infringing the procedure".

1. The award does not fully define and if the opinion of the representative of the pro-court trial at the trial on 27 March 2019 is not yet heard.

2. The Court violated the procedure for resolving the counterclaim: On 18 July 2016, Mr Vu demanded that the money, gold and foreign currency distributed by Thao to the banks be avoided. goods. However, since the initiative for this counter-claim did not take into account the procedures for requesting counterclaims such as the lawsuit, the plaintiff had not had a meeting to examine the application, access, public story. and reconcile before the beginning of the trial, which involves this in the trial and is not accepted by Mrs Thao. VKS believes that this violates the provisions of the Civil Procedure Code of 2015. t The journalist Diep Thao replied to the court.

3. The award declaring the time of support from 2013, as long as the children are mature, working and self-sufficient, is not appropriate to the will of the plaintiffs at trial and makes it more difficult to enforce the criminal sanction.

The VKS said that the sentence was split into Mr Vu, 60%, Mrs Thao had 40% of the shares, not in accordance with the provisions of the Marriage and Family Act 2014, and assigned Mr Vu all the shares. In 7 companies and the payment of the difference in funds for Mrs Thao is unfair because the share has not been valued, the value of the brand, in addition, shareholders also have corporate governance rights. shareholders' rights, dividend rights, information and supervisory rights in the company, if they are divided into g. Dang Le Nguyen Vu, which owns all shares in 7 companies, and withdraws Le Hoang Diep Thao's rights under Article 110, Article 119 of the Companies Act of 2014, Representative of the VKS in the divorce proceedings between Mr Dang Le Nguyen Voum and Mrs Le Hoang Diep Thao.

6. The judgment does not delay the settlement of claims and the counterclaim has been omitted.

8. The penalty for suspending the requests of other parties is Mr. Dang Le Nguyen Vu and Ms. Le Hoang Diep Thao for Trung Nguyen Group companies arising from commercial business activities with the status of shareholder and member of the company in connection with the creation, transfer, operation, termination, merger, consolidation, separation, transformation of a corporate organization and other commercial activities Commercial sales related with all the companies of the Trung Nguyen group, exceeds the requirements of litigation in disputes that are not within the scope of the case and cause difficulties in the execution of the judgment.

9. At the level of 1.764.633.211.401.22 VND at the three banks provided by Mr. Vu, but until the judgment was delivered, the balance sheet amount was only VND 1,312,686,303. The Court of First Instance did not verify the origin of the money, then it was transferred to the place in which time, to what purpose it is used and who is currently operating, only when it is clarified. ensuring the sharing of the common property of the parties to the dispute. The decision of the judgment is inaccurate, which makes it difficult to enforce the judgment because the results of the verification at the time of trial in three banks were only VND 1,312,686,303.

Dang Le Nguyen Vu and Mrs Le Hoang Diep Thao also filed an appeal. While Mr Vu wants to be split into a ratio of 70/30, Mrs Thao disagrees with the court's position on the division of assets from 60/40. The separation of thousands of people was closed, Mrs Le Hoang Diep Thao had to take a "leave" from Trung Nguyen when the property was divided into 60/40 and g.