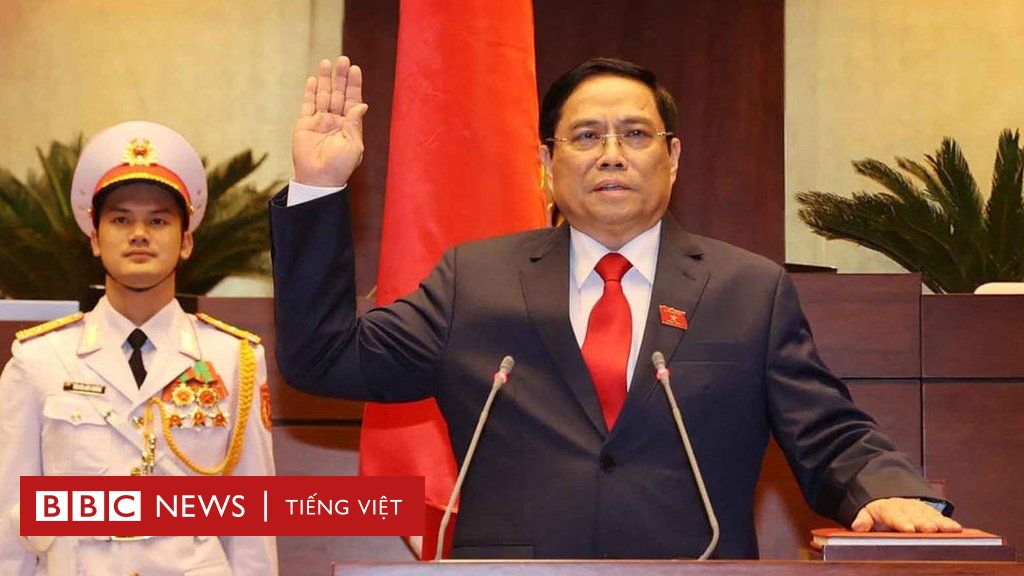 Mr Pham Minh Chinh, the only candidate for Prime Minister, received more than 96% of the vote.

He replaced Mr Nguyen Xuan Phuc, who had previously sworn to become the new president.

This statement also marks the completion of positions in Vietnam’s top leadership over the next five years.

However, in form, this is just the order of the 14th National Assembly, which will soon be gone. As a result, re-elections and re-oaths are expected next May, following the new parliamentary elections, with pre-determined results.

During the opening ceremony, Mr. Chinh swore full allegiance to the state and the people.

He said the election to the post of prime minister is an honor and a great responsibility for him.

From February 2016 until now, he has held the position of Head of the Central Organizing Committee.

Spiced up in the intelligence industry

Prior to that, he held various positions, from the lowest to the highest in the intelligence industry of the Ministry of Public Security, including the Deputy Director of the General Intelligence Department, specializing in economic intelligence – science, technology and the environment.

From 1991 to 1994, he worked for some time at the Vietnamese Embassy in Romania with the Ministry of Public Security.

This is the period after the collapse of the communist regime in the host country and the Eastern European region, which Vietnamese leaders have so far seen as an event they must learn from experience to protect the regime.

During this time he was promoted, from cadre to 3rd Secretary, then to 2nd Secretary of the Embassy.

After that, he continued to work at the Ministry of Public Security, with the highest position he ever held at that ministry as Deputy Minister of Logistics – Engineering, Finance, Science, Technology, Environment, from the end of 2010 to the end of 2011.

Prior to serving as head of the Central Organizing Committee, Quang Ninh was secretary of the provincial party committee from 2011 to 2015.

During this time, he was known for his major role in promoting the construction of one of the three special economic zones and the adoption of a related law, which was later delayed after a wave of anti-Chinese protests. population across the country in 2018.

In mid-January, Professor Carl Thayer, an observer of Vietnamese politics from Australia, told the BBC that he found Pham Minh Chinh “suitable for president instead of prime minister”.

The reason, according to Professor Thayer, is that Mr Chinh has a lot of experience with party work and the security industry, but not with economic management:

“Mr Pham Minh Chinh is in ninth place in the Politburo, two above Vuong Dinh Hue, who is eleventh.”

“Mr. Chinh has a long history in both the party apparatus and the security industry. He is secretary of the party’s central committee, head of the central organizing committee, and former party committee secretary Quang Ninh.”

“He used to hold many positions in the Ministry of Public Security in the areas of logistics, engineering, intelligence and as head of the party’s central committee for political protection. This experience would certainly suit him as president instead of prime minister.”

However, in a BBC interview at the end of 1/2021 Assoc. Dr. Vu Minh Khuong, a lecturer at Ly Quang Dieu School of Public Policy at the National University of Singapore, commented that Mr Pham Minh Chinh had “local experience” when he worked in Quang Ninh.

“The province of Quang Ninh has a low level of competition, but after Mr. Chinh’s takeover, the province has made great progress and is one of the leading provinces,” said Dr. Wu Minh Khuong.

“So far, Quang Ninh is still one of the bright spots in the reform because of the leadership that has chosen the right direction. We can say that Mr. Chinh has a strategic approach and a problem-solving approach. Effective practice.”

Before Pham Minh Chinh was sworn in as Prime Minister, two more positions in the “four pillars” were confirmed and the inauguration process completed, including Mr. Vuong Dinh Hue as Speaker of the National Assembly and President Nguyen Xuan Phuc.

The position of alleged supremacy in the Vietnamese political system, the General Secretary of the Communist Party, continues to be occupied by Mr. Nguyen Phu Trong, after the election results during the party’s 13th congress at the end of the month.