The story of the tragic repayment of debt by Phan Thanh Tung (Hanoi) at the big forum on cars and motorcycles received nearly 6,000 interesting times, with more than 1,000 comments.

According to Mr. Tunga recently received a notice from the bank (branch Linh Dam, Hanoi) of the opening of credit cards with a total balance of 196 dong and a delay of payment of 968 days (until 31 March 2019), together with Mr Tunga's request "to repay the debt in full , in order to avoid the unfortunate disadvantages of the above-mentioned debt ".

Tung was also surprised when the credit information center – the CIC at level 5 of bad claims even cited the debt situation in the VND 196. t 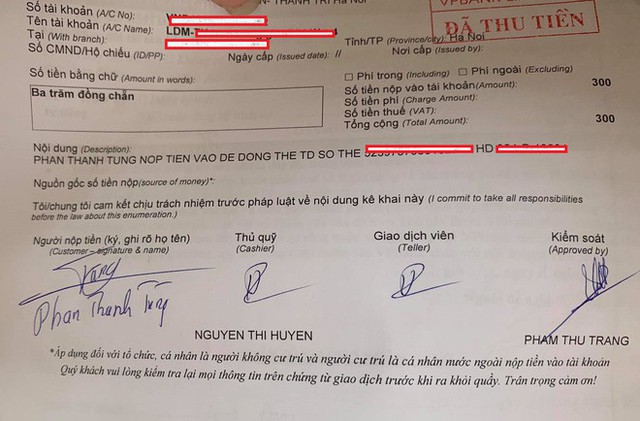 The amount requested by Thanh Tung Bank is 300 VND.

Referring to the process of creating outstanding loans, Mr Tung said that he did not use it after opening the credit card. After two years, he has to pay more than a million dollars to keep the card.

"This debt I paid through online banking a few years ago. I thought that the payment was complete, now the bank has sent a note of the debt of VND196 and a fine of VND5, and the bank said that it has to pay VND300," he said Tung.

Due to a special debt, Tung had to earn two VND 200 accounts for payment directly to the bank on April 11th.

"The bank told me to pay 300 VND, I paid 400 VND, which is probably the biggest transaction in my life," said Tung.

Although the guest Phan Thanh Tung said that this is an obligation and does not seem too problematic when asked by the bank, many comments on his story show that the bank should flexibly handle its debts. too small as above.

"The amount is too small to be transferred, but for the bank, this is very time consuming for both parties. Well, that's a lesson that needs to be given more attention in opening a credit card," Phi Hoai Thanh said. point of view.

Tung's story of debts of only a few hundred dollars has caused many people to surprise because it was too vague on terms and charges for opening credit cards and how to check bad debts (personal CIC). .

Also, many have said that when a credit institution refuses to lend a new loan, it is known that bad debt is in the bank.

"In order not to fall into bad debts, such as Mr. Tung, every payment period is a little more, the excess is more than inadequate, the bank self-sustains the right amount of money, but it affects the CIC, it is very difficult to borrow Tran Thanh It expressed its views.

Even if it does not need to be used, customers still have to bear additional costs, such as annual fees and account maintenance for subsequent years, or some penalties for non-payment of credit card debt. timely.

Most current credit cards on the market have an annual fee of around 100,000 VND to more than 1 million VND / year. The most popular and most used cards have a total fee of less than 500,000 VND / year.

According to Hoang Linh