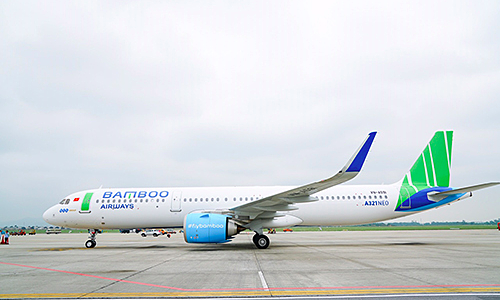 The Airbus A321NEO is a "trump" of the company to promote the exploitation of Asian routes in the second quarter.

On the morning of April 13th, Bamboo Airways accepted the Airbus A321NEO into the fleet and prepared a plan for expansion to the international market.

Representatives of the company said that the expansion of the fleet from a long holiday contributes to meeting the demand for a sudden increase, continues to maintain standard flight experience with five stars and the real speed of flight hours.

Increase the space for the cabin

A321NEO (new engine option) with a length of 44.51 m, 11.76 m high as the standard version of the A321, but the passenger compartment is designed wider than other aircraft. such as A321CEO (current engine option – normal engine option).

In order to increase the comfort of the passenger compartment, Bamboo Airways reduced the seat configuration to 198 seats, optimizing the space for sitting, resting and leaning back, thereby increasing the transition area in the area from which it is withdrawn. A brief time to embark and stabilize luggage.

An internal cabin that uses main tones creates a sense of luxury and comfort. All seats are clad in solid leather and are equipped with USB power so users can charge their phones or electronic devices at any time.

A critical preparation for the Asian aviation axis

Airbus A321NEO is a modern generation of aircraft that is located in the A320 family of Airbus's best-selling narrowband aircraft with more than 14,700 orders since its launch.

Advanced technology reduces fuel consumption by 15% and is expected to reach 20% by 2020, thanks to improved cabin and efficiency. Each year, new aircraft can reduce up to 5,000 tonnes of CO2 emissions and almost 50% of the noise compared to previous generation airplanes.

The efficiency of the A321NEO was confirmed when the operation of less than 5 hours in Asia is also a key market that Bamboo Airways is exploring in the second quarter.

After entering the fleet, the A321NEO will be operational in April for the first flights to Korea, Taiwan, Japan.

Bamboo Airways also announced that it will capture the potential destinations of top airlines such as Singapore, China … and Eastern Europe.

According to the International Air Transport Association (IATA), China will replace the US in 2022 as the world's largest aviation market, including flights overseas and abroad, and internally. DBS, Singapore's largest bank, predicts that the number of airline passengers in the country will triple to approximately 1.5 billion in 2036 when people will be richer and travel more.

A Bamboo Airways spokesman said the addition of the A321NEO continued to confirm the ongoing efforts to complete the fastest fleet, which soon connects Vietnam to the Asian Year, contributing to the growth of the tourism industry. especially calendar and economy in general.