The General Road Department of Vietnam is coordinating with the Traffic Police Department and the Ministry of Public Security in order to review the work of providing traffic on the NH1A section of the Hanoi – Lang Son section. 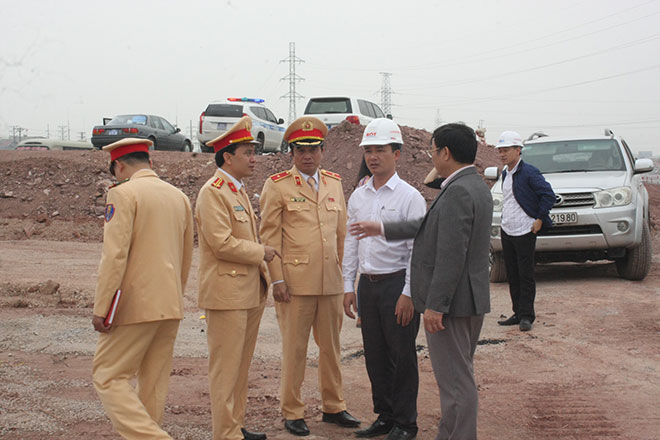 The delegation of the National Administration for Road Administration and Traffic Police in Vietnam has examined and instructed operators to address the deficiencies on Highway 1, the Hanoi-Lang Son section

Today, afternoon (28 February), the General Road Department of Viet Nam coordinated with the Traffic Police and the Ministry of Public Security to inspect and inspect work to ensure road safety and progress in the construction of traffic sections on the section Ha. Noi – Lang Son.

He was talking about a traffic magazine, Mr. Dang Van Trung, deputy director of the traffic safety department (VNA), said the results of the survey showed that the road surface in both directions: Hanoi – Lang Son and vice versa. smooth construction.

"The crossroads of the Bac Giang province, which is in the construction of a flyover, has an empty road surface, some surfaces are welding. The General Department has demanded that the contractor Bac Giang – Lang Son BOT is a joint stock company for the immediate restraint of roads, claws, compensation and the extension of a two-way lock system to ensure the quality and breadth of road services. According to Trung, the General Department also asked the contractor to complete the work to overcome the lost traffic points before tomorrow night (1/3).

"After completing repairs, vehicles and machines must be quickly removed from the road surface for smooth traffic, which ensures safety for international missions," Trung said. Lieutenant Colonel Ngo Van Phuc, Deputy Chief of Traffic Police Department, Bac Giang Provincial Police also said that National Route 1A passes the Bac Giang province with a length of over 37 km with many roads undergoing upgrading and renovation. In order to ensure absolute traffic arrangements between the US-Trieste Summit in Vietnam, Traffic Police, the Police, Bac Giang, works with the contractors and the Ministry of Transport to organize fair channels.

"Crossing the intersection on the section Ke is in the process of construction, so we regularly regulate the obligation to run the channel so as not to cause congestion in order to serve the journey of people and work delegations. it's convenient, smooth, "said Colonel Phuc. Forces of mine detection on the route from Lang Son to Hanoi before the US-Trieste Summit.