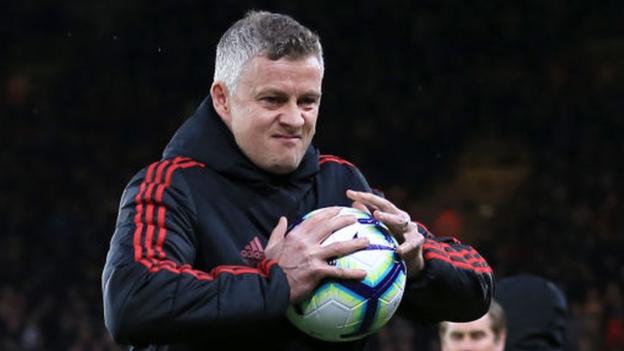 Manchester United players face a "survival of the fittest" to stay at the club, according to manager Ole Gunnar Solskjaer.

Solskjaer was named a permanent boss in March after replacing Jose Mourinho in December.

United have won 15 games in all competitions under the Norwegian – but remain on the sixth place in the Premier League, two points behind Arsenal.

"We need players here who will be able to take us forward," he said.

Solskjaer suggested that Wednesday's 1-0 home defeat by Barcelona, ​​in the first leg of their Champions League quarter-finals, showed how far United should go to match the very best.

"We played against a Barcelona team that sets the standard in European football," the 46-year-old told a news conference on Friday.

"We're under illusion that it will be hard work and there will be some tough decisions made by me, Mick [Phelan, the assistant manager] and the club.

"You want to see players step up and say now: 'I want to be part of this.' You saw Fred and Scott [McTominay] the other day took the mantle up. That's what we expect from all the players. "

United's squad is set to change over the close season. Contract talks with midfielder Ander Herrera are ongoing despite reports linking him with a move to Paris St-Germain in summer, but Solskjaer confirmed Antonio Valencia will definitely leave and the club will be looking for a new captain.

Considering who could take on the role, the manager said: "We've had Antonio, he's going. We've had Ashley [Young], we 've had Paul [Pogba] and David [de Gea]. Chris [Smalling] has been a captain. There are players here who can be a captain on the pitch. We just need to decide who will be the voice in and around. "

United host West Ham in the Premier League on Saturday.