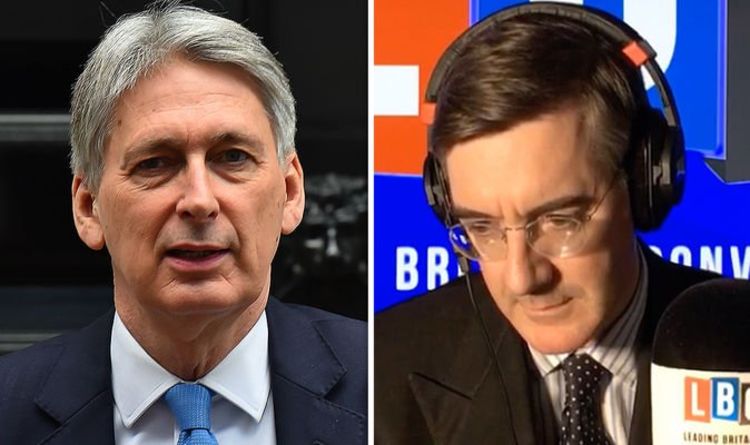 The conservative deputy for North East Somerset, Jacob Rees-Mogg, took Brexit at the LBC Fair in Brend. Mr. Rees-Mogg marked Mr G. during a talk with the radio caller. Hammond for the "Lead Warner". The caller, known as Tony, said: "Philip Hammond was wasting money, he lost $ 4 billion in taxpayers' money.

"Now I should leave with Theresa May, but of course they will not." They just want to destroy us. "

He added, "Whatever Teresa May said, she made a complete contradiction.

"He says that there will be no other referendum, you can bet that your life will be there, which really worries me right now, I really do not think we're going, really not."

The Conservative Member then stepped in with the Chancellor, Mr Hammond.

Rees-Mogg said: "I accept your criticism of the chancellor because he was a leading Remoaner, right?

"The most important opponent of Brexit, as far as he can prove himself from the government."

The caller claimed that "the only way out" was if the government did not support the prime minister, which was supposed to be "the best thing" before Tony called on Mr Rees-Mogg to take over the reign of Brexit.

On Friday, the Chancellor defended £ 4bn for the preparation of Brexit during an interview with Sky News.

He said: "It would be irresponsible not to prepare for any business, as long as this is a true, possible outcome.

"Preparing for events that we hope to not happen is a daily part of the government – we are preparing for all types of results to ensure preparedness and manage them and mitigate their effects if they occur.

"To be clear about this, we have spent up to £ 4 billion to get ready for Brexit, but this is not just for Brexit without a contract.

"A lot of money should be spent on preparing for Brexit, setting up new systems to replace the EU systems that we have used up to now."

He was referring to the Finance Ministry's questions earlier this week, when the Chancellor denied he demanded a second vote on Brexit.

He said: "In contrast to some of the reports, I never advocated a second referendum. I simply found this to be a coherent proposal along with many others that we discussed in this House."

She is coming after a restless week for the Prime Minister, after she agreed to extend Brexit to the European Union by the end of October.

On Thursday, the Prime Minister spoke to Members that their "national duty" was to agree to an agreement on Brexit.

She said: "We have to solve this. In order to leave the European Union as soon as possible.

"To avoid the issue of having those European parliamentary elections. Above all, we will be able to fulfill the democratic decision on the referendum to move Brexit and our country forward.

"This is our national duty as elected members of this Parliament – and today nothing is more pressing or more important."

When he left the conversations on Friday, Chancellor of the Shadow John McDonnell insisted that the referendum "is always on the table".

Mr McDonnell said that the possibility of voting at the end of the Brexit process was 'triggered at each meeting'.

The talks were led by de facto Deputy Mayor David Lidington, and Secretary of Brexit in the shadow of Sir Keir Starmer.

The government still hopes to be able to get a timely agreement in Parliament in order to avoid the need for Britain to vote in the European Parliament on 23 May.