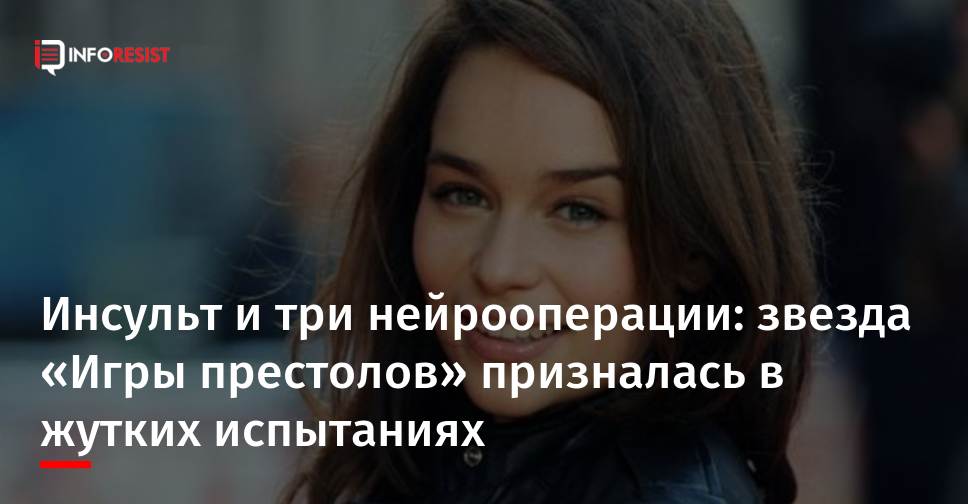 Star of the "Game of Thrones" series Emilia Clark, who played charming "Mother of Dragons" Daenerys Targaryen, recognized in an interview New Yorkerthat during the recording of the epic epic cult film he suffered a stroke and three brain surgeries.

A famous person always believed that her health was good, despite the low pressure that sometimes caused dizziness and a rare fainting. The girl was charged with stress, and in February 2011, after recording the first season, she felt a headache and a severe weakness during sport.

"I almost got into the wardrobe. I came to the toilets, fell to my knees … Pain – shooting, stabbing, clinging – has increased, "recalls Clark.

The actresses were helped by a woman who was nearby. The star was taken to a hospital with a confused consciousness. MRI scan showed that a known person had a stroke – subarachnoid bleeding. A third of patients with a similar diagnosis died on the spot, but she was lucky, but needed urgent surgery.

The surgical procedure lasted for three hours. It seems – everything behind. But that was only the beginning. Clark has a speech disorder. She was frightened because her career was attacked.

"In the worst moments, I wanted to finish everything. I asked the medical staff to let me die. My work – all my dreams about how my life will be – was focused on language, on communication. Without it I felt lost, "Emilia admitted, but after a week the speech was restored.

A month later, the star returned to normal life, but she was forced to take morphine due to severe headaches. She soon felt weak and dizzy – doctors found another aneurysm, which the doctor began to observe. In 2013, at the end of the third season, she was told that another operation had to be done – an aneurysm had increased.

During the operation, aneurysm torn apart and caused brain haemorrhage. She had to open the skull and necessarily do another operation. One month at the hospital, Clark seemed to be hell.

"It seemed to me that there was only a shell left. Now it's hard to remember these dark days in all details. My mind blocked them. But I remember that I was convinced that I would not survive, "he remembers with horror his experiences.

Clark carefully hid what happened from the press and denied everything, but now he decided to tell the truth. Now the star feels great. After experiencing, she established a charity project called SameYou, which helps people with head or throat injuries to help with proper treatment.