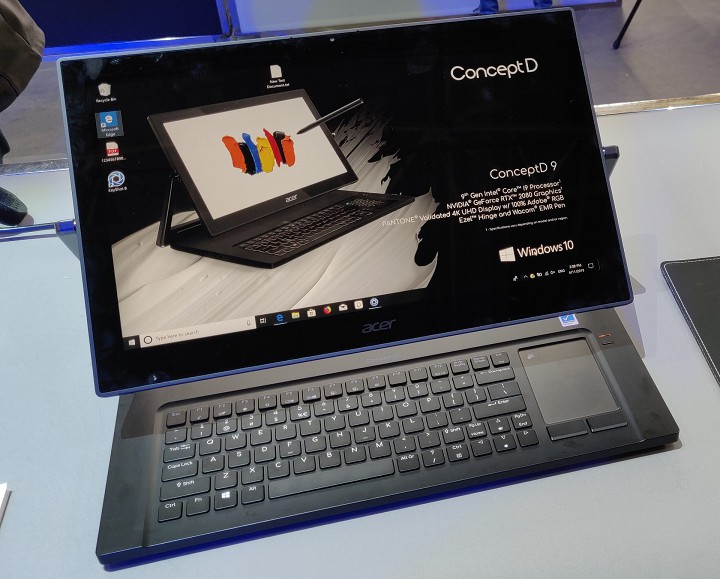 The next press conference next @ acer was marked not only by the appearance of many updated products, but also by presenting the Acer ConceptD series of devices intended for representatives of creative professions. Includes laptops, monitors, desktop and even VR headsets. One of the most exciting new brand solutions was the ConceptD 9 notebook. It is equipped with a 17.3-inch 4-inch touch screen on the Ezel Aero Hinge hinge, which allows the display to be fixed in various positions. Declared 100% coverage of Adobe RGB and Delta E <1. In addition, there is support for Wacom EMR. "Under the cover" is the Intel Core i9 processor of the ninth generation, the Nvidia GeForce RTX 2080 graphic interface, up to 32GB of DDR4-2666 RAM and two 512GB NVMe drives in the RAID 0 series. The Acer ConceptD 9 will approach the European sales environment by the end of the summer with a recommended price of 5,000 EUR. The Acer ConceptD 7 and ConceptD 5 models are in one step, and in both cases, we use an IPS matrix with a resolution of 3840 x 2160 pixels and a diagonal of 15.6 inches, which is known for 100% coverage of Adobe RGB and Delta E <2 color space. The Laptop ConceptD 7 is primarily intended for video editing users, and the concept of ConceptD 5 should be at the taste of professionals in the field of graphic design. The Acer ConceptD 7 is based on the 9th generation Intel Core i7 processor, produced by the video accelerator Nvidia GeForce RTX 2080 Max-Q. The maximum amount of RAM is 32 GB, and two 512 GB NVMe SSDs in the RAID 0 series are available for storing data. On the shelves, ConceptD 7 will appear in July with an initial price of 2300 euros. Meanwhile, the Acer ConceptD 5 is based on the Intel Kaby Lake-G hardware platform. The maximum configuration is equipped with a 4-core Core i7-8705G processor with AMD Radeon RX Vega M GL graphics. The board has 8 or 16 GB of separate DDR4 memory, as well as a RAID 0 pair with 1 TB NVMe drives. The ConceptD 5 will start in the middle of the summer and the price of a laptop will be € 1,700.