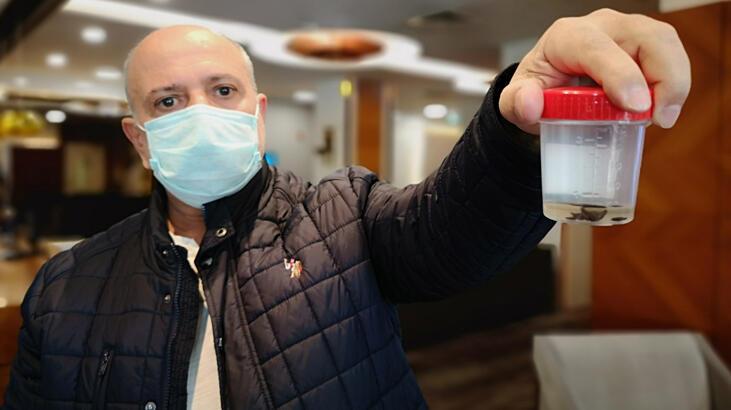 The unfortunate incident happened to Yusuf Çebi, who lives in Istanbul, in the factory where he worked years ago. Çebi, who started laughing while eating pine nuts, pushed the pistachio into his breath. Yusuf Çebi, who began to complain of a severe cough and sweating, gasped at the hospital. Pine nuts were not found after investigations. Biebi, who was receiving antibiotics, turned to the doctor again this time as his complaints continued to increase. This time, the blanket was examined with suspected cancer. The unfortunate man, who did not get results with this treatment, regained his health exactly 32 years later. Biebi, whose pine nuts were discovered in the left side of his lungs and caused an infection, regained his health after bronchoscopy surgery. Chest specialist prof. Dr. Ali Metin Görgüner said: “This patient was the longest case of strangers I have ever seen in my professional life.”

Saying that the unfortunate event he experienced lasted for years, Jusuf Cebi said: “32 years ago I had pine nuts in my mouth while chatting with friends. Meanwhile, a friend’s joke made me laugh. Suddenly a cough and pine nuts started. in my mouth they ran down my throat.Then I got a few pieces in my hand.I relaxed a bit and when I turned my back I noticed that the remaining pieces were falling down my throat.The burning sensation started.Then a strong cough started , I started sweating. “he said.

“BIOPSY WAS ORDERED BY RK SUSPECT”

Explaining that he had first been treated with antibiotics, biebi stated that a biopsy had been performed with suspected cancer, and said:

“I went to the doctor and examined me. I told him I had peanuts in my throat. The doctor examined me,” if you don’t respond to treatment, we can operate on you. “They used antibiotic treatment. I was in the hospital for 3 months. No mucus, just a dry cough. I had a very dry cough. I was afraid to even breathe. I was a crazy cough. A year later I got sick again. This time a suspected biopsy was performed. I was very scared when I heard the suspicion of cancer.Although I told the doctors I was devouring peanuts, they were told that peanuts were not found in the movies.After 32 years, peanuts were found in the tomography.Peanuts caused an infection in liver, it started to cover my body. It caused fungus in the sputum. I couldn’t lift my head. I told them to always take the liver. But now I’m regaining my health, I’m like butterflies. ”

Aspiration for a foreign body is widely observed in Turkey açıklayangöğüs disease specialist prof. Dr. Ali Metin Görgüner said: “This is a situation that can have fatal consequences in children. It can also be observed in the elderly. It is seen as a result of the entry of objects such as a turban needle, foam cap, peanuts, money into the airways. However, this patient was the longest case I have ever seen in my professional life. “

They state that when foreign bodies are abducted in the lungs, the bronchi are located on the right side due to their anatomical structure. Dr. Ali Metin Görgüner said: “When it stays in the lungs for a long time, the body tries to expel it. Infections are constantly recurring in this area. This situation can cause a pseudo-tumor. Doctors can see the appearance of a tumor in the picture,” he said. Görgüner said the pine nuts were removed by bronchoscopy after 32 years and that the patient was in good condition.