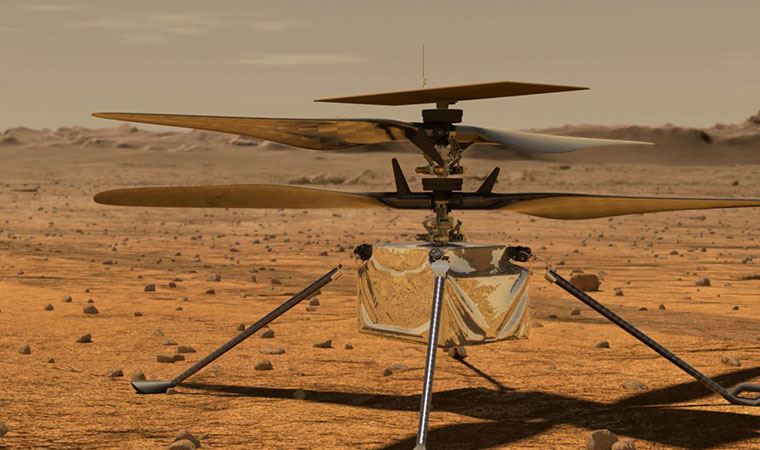 The first message from a helicopter sent to Mars by Mars with a Perseverance vehicle arrived on Earth. The message contains “data indicating that the helicopter is operating as expected”

NASA CEO Thomas Zurbuchen said the plane, named Ingenuity, would be the first helicopter to fly to an extraterrestrial planet if it were successful.

Perseverance, launched into space on July 30, landed successfully on the Red Planet on Thursday night. The spacecraft shared a series of stunning photos of Mars that showed the operations going according to plan.

Now, scientists have received direct news for the first time from a helicopter that reached the Red Planet in Perseverance’s stomach.

The helicopter was able to send data to Earth via a space probe called the Mars Reconnaissance Orbiter, which was launched in 2005 for exploration and exploration in the orbit of the Red Planet. This space probe, which orbits the planet, also acts as a satellite that communicates between Mars and Earth.

Tim Canham, head of Ingenuity operations, announced yesterday that they would begin recharging the helicopter’s batteries with data showing the mission is progressing as planned:

We looked for two important data in the data. Ingeunity battery status and whether the base station is operating as planned. (…) They both look great. We will start charging the batteries with this positive data.

Ingeunity must first store energy in its batteries. Thus, he will be able to leave the belly of the spaceship and warm up on cold nights when he is alone on Mars and continue other vital processes.

Ingenuity is currently quietly waiting in Perseverance’s Bay belly. The two-kilogram helicopter is expected to operate after 30 to 60 days. Meanwhile, scientists will look for an area 10 meters by 10 meters to take off the helicopter on the surface. This area will be selected from the relatively flat and unobstructed part of Mars.

In light of the first test of this new aircraft technology and observations of future missions to Mars, second-generation helicopters could be developed. These helicopters will perform reconnaissance missions for crew carrying small loads and explore hard-to-reach places such as cliffs, caves and deep craters.