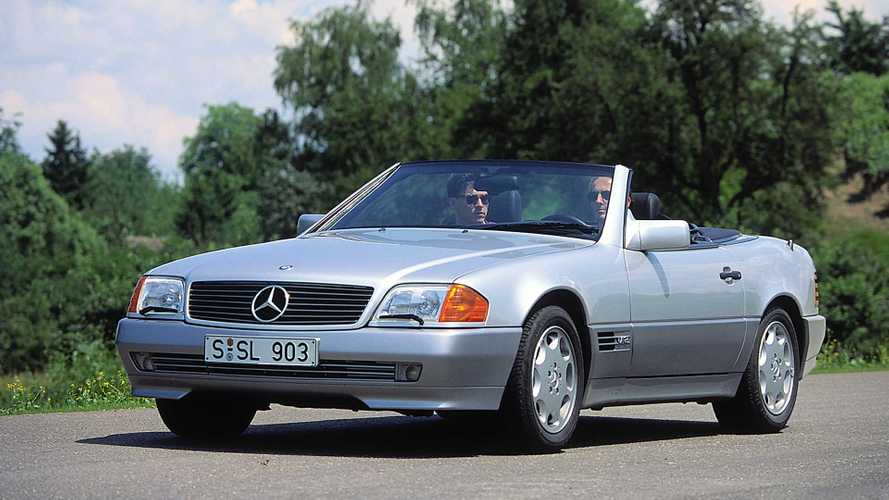 The new Mercedes SL has created a dual feel at the Geneva Motor Show thirty years ago: on the one hand, the internal rating is R 129 with a balanced design. At the same time, it combines the aims of sportiness and comfort. After all, the fans are curious about what will happen after 18 years on the SL series 107. The result is a sophisticated, open sports car, which means "fascination of driving in unparalleled dimensions". This is what the Mercedes Salon Kit says, from 9 to 19 March 1989.

In 1990, the sports car received the Car Design Award for the production vehicles of the cities of Turin and the region of Piedmont. Bruno Sacco, then director of design at Mercedes, was born in Italy. The SL design carries its signature – with clean lines and surfaces without padding, slightly wedge-shaped bodies and strong accents. The design also provides good aerodynamics: if a standard solid deck is installed, the R 129 reaches an excellent resistance coefficient cW = 0.32.

The development of the 129 series continues in the mid-1970s, but as can be seen from the number (far ahead of the new SL, W 126 and W 124 appear), the development can be achieved. There are always concerns arising from an open coupe sports car, as in the SLC 107 series, but not realized. (Instead, you create an elegant hard roof that every 129er SL standard will have.) In the early 1980s, work increased. The model to be measured in the wind tunnel in November 1981 is clearly marked by the signature of Bruno Sacco. On October 17, 1984, the Roadster received mold release, and on 10 December 1985 Mercedes-Benz stated that the R 129 would start in August 1988.

In open vehicles, however, there is an additional risk of rolling over in addition to the usual accident scenarios due to the lack of a solid roof. At the beginning of the development phase, the fathers of the R 129 series are therefore thinking of the Targa solution, in which Pillar B is extended to a fixed stick. But the roadster's classic lines would be disturbed.

An innovative solution is found: automatic roller. 30 years ago, celebrates the world premiere SL. The spring-loaded pre-tripping device in critical driving situations sets in only 0.3 seconds. Another novelty for passive safety and comfort is the electrically adjustable integral seats, which were first realized in R 129. In each case, three-point safety belts with belt retractor and belt tensioner, belt height adjustment and head restraint adjustment are installed.

Engineers have also greatly developed into a fully automatic R 129 series that has a complex frame kinematics, and the control unit monitors processes with, among other things, 17 terminal switches. Premiere also has a new wind deflector in the new SL. Today, this solution is one of the standards for open vehicles. Another specialty is the hard roof with a panoramic glass roof, which is available in later years.

The modern chassis contributes to a high level of comfort. Among them is the Adaptive Damping System ADS, which has its world premiere in R 129. Fully automatic adjusts the damping in parts of a second to the corresponding driving conditions and is associated with automatic level control.

In 1989, the new SL met with enthusiasm, since buyers from the very beginning used the existing production facilities at the Bremen plant. In the first two years and half of the production, 52,204 vehicles of the R 129 series were produced until December 1991. Only in 1991, 25709 of these sports cars were produced. More than a third of these products (34.7 percent) are exported to North America, Germany is the second most important market with 30.4 percent.

In the summer of 1992 Mercedes introduced a new top model, the 600 SL with the V12 engine and 394 hp. It is the first SL with a two-stage engine. Its exclusive nature is highlighted in the interior with wood and leather. Outside, it refers only to the nameplate and the V12 emblem at the air outlet openings at the top of the Mercedes 600 SEL engine. However, a great engine makes this SL quite difficult, even maintenance costs are huge.

The reorganization of Mercedes-type markings also applies to SL in July 1993: The class mark now stands before the sequence of numbers according to the size of the engine. At the same time, two three-liter versions of the 300 SL (the last SL with this magic name) and the 300 SL-24 were replaced with SL 280 (193 hp) and SL 320 (231 hp). Both have four-cylinder six-cylinder engines. At present, 85,300 R 129 series are produced.

Exclusive special models and sport-optimized top models maintain demand in the nineties. The result of direct cooperation between Mercedes and AMG in 1993 is the new top SL 60 AMG model with 381 hp. Between 1994 and 2001, 20 special series were produced in various editions, ranging between ten and 1,515 vehicles. Popular models include, for example, Mille Miglia Edition and Special Edition.

At the IAA 1995, the Stuttgart brand introduces revised SL. Outside it is visible on the grille with six ribs, through the white front lights, the bi-chromatic rear lights and the new sidewalls. During the technical changes, the new, electronically controlled five-speed automatic transmission in the 500 SL and 600 SL. Mercedes-Benz introduces new xenon headlamps under the title "Light from the gas". The premier also has a new panoramic glass roof, made of four glasses of different thicknesses glued to the aluminum structure in the raised SL. Optional is available from 1996.

SL is constantly evolving. For example, since December 1997, all types of road users have received a BAS support braking system. In April 1998, Mercedes introduced a re-updated SL on a car in Turin. The new V6 engines in the SL 280 (204 hp) and the SL 320 (231 hp) models are included in the foreground and the new V8 engine in the SL 500 (306 hp). Changes on the exterior are five-hole aluminum alloy wheels, visible exhaust pipe, SLK R 170 exterior mirrors and door hinges, and cylinder locks in body color. The interior is equipped with a new four-wheel steering, chrome-plated instruments and standard leather nappa.

In 1999, two versions of the AMG updated SL were followed. The SL 55 AMG has already been introduced in the 5.5-liter V8 engine (354 hp). Sizes of the SL 73 AMG: Affalterbach drills V12 to 7.3 liters, which is enough for 525 hp. Since the 1970s, there have been no major Mercedes cars in the Mercedes. In addition to its sporty appearance, the AMG features a mixed tire with rear aluminum wheels and tires.