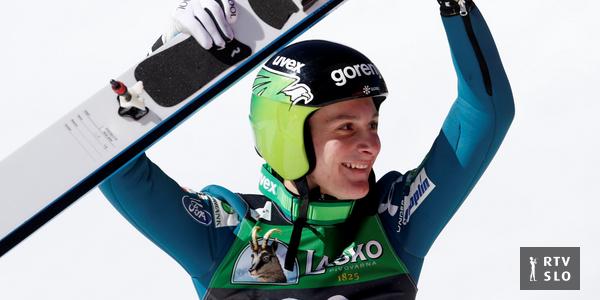 Kobajaši thus "cleaned up" a small crystal globe for scoring flights, and is also the best in the sum total of Planica 7. The third place was won by Marcus Eisenbichler, alongside Domnack (his flight in the first series was 239.5 meters in length, in finals 222 , 5 meters), two Slovenian jumps were very much in the mood. Timi Zajc won the fifth and Anze Semenič was ninth in the title. Zajc finished third in Placement 7.

The hot sun destroyed the ski
Kobajaši celebrated the 13th win of the season (the record holder remains Peter Prevc with 15 victories), 21 times on the podiums (Prevc 22 times in the unforgettable season 2015/26), and in his total, his advantage over the second-placed Stefan Kraft (today was only 17.) at the end of more than 700 points. Today, Kobajaši was also laughing at the Slovenes, especially Domnu Prevac, who for the second time slipped to the winning stage: "I feel wonderful. All the emotions came to the plan. There was already a lot of water in the ski and I thought only how I would find out. When I landed and looked at the figures, I hoped that it would come out. I knew I would be on the stairs, but I did not think I would take the lead. "

Exceptional first series and incredible Kobayashi
Around 15,000 spectators were following another unforgettable day, the first series offered a series of exceptional flights. Anže Semenič set his personal record with 241 meters, Domen Prevc took the lead with 239.5 meters, which neither Piotr Žyla and 239.5 meter long flight took him. Then the culmination: Ryo Kobajaši, ideally, flew 252 meters away and congratulated the 50th anniversary celebration commander. For the world record, it's about a meter and a half behind. He had some trouble landing, but he did not run.

The finals are much shorter jumps
Kobajaši's surplus frightened the jury, which lowered the runway, although the wind situation was no longer so favorable. In the final, most of the jumper flew at least ten meters less, and the longest flight succeeded David Kuback, 234 meters. Domen Prevc had the worst conditions in the group of the best flighters, however, with his aggressive style he pulled up to 222.5 meters and got a duel with Eisenbichler for a point and a half.

Slovenia is sixth in the national cup
The last casualty of the season was who will win the globe for flying, Kobayashi or Eisenbichler. The German had only four points and after the first series, while the Kobajaši were on the top, it was more than not clear that the winner will be Rojo Kobajaši. In the Cup of Nations, for the second time in a row, the best Poles, Slovenia won the sixth place.