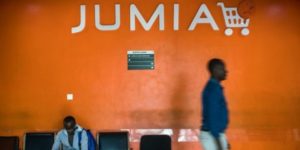 The Pan-African online trading platform has just announced the entry to the New York Stock Exchange, the largest stock market in the world. The first to start the whole.

It has been several months since the group prepared this entry. Its performance was officially announced this Friday, May 12: Jumia, the largest Pan-African e-commerce, is now listed on the largest stock exchange in the world, the New York Stock Exchange (NYSE).

"This historic moment has enabled the hard work of our teams, the trust of our consumers and the commitment of our vendors and partners," said Sacha Poignonnec and Jeremy Hodara, co-founders and co-founders. Directors Jumie.

This is the first time that the African momentum has reached the NYSE, which will allow it to raise more funds to finance its expansion. With 13.5 million titles on the market for a price between 13 and 16 dollars per share (between 11.5 and 14.1 euros), the platform hopes to raise a $ 200 million loan.

The platform, which was established in 2012, based in Nairobi, raised a total of $ 824 million in five rounds, according to the Crunchbase database (Jumia's value was $ 1.2 billion in fund-raising in 2016). ).

Its capital is being shared between the original incubator, the rocket internet (21%), MTN (30%, but the South African group wants to sell its shares), Millicom (9.6%), Axa (6%), Orange (6%) , Pernod-Ricard (5%) and banks and investment funds, including Goldman Sachs.

Its shareholding will be diversified in the same way as its activity: Jumia, which was initially a platform for connecting sellers and consumers, now offers online payment services, meals delivery, hotel reservation, and has developed its own platform.

Profitability has not yet been achieved

Jumia operates in 14 African countries and has over 81,000 active vendors. The Group directly employs over 5,000 people in Africa with approximately 4 million customers in 2018.

If the group is still unprofitable, its performance improves from year to year, which was used as an argument for obtaining a NYSE ticket. The initial business volume in 14 countries reached 828 million euros in 2018, 68% more than the year before.