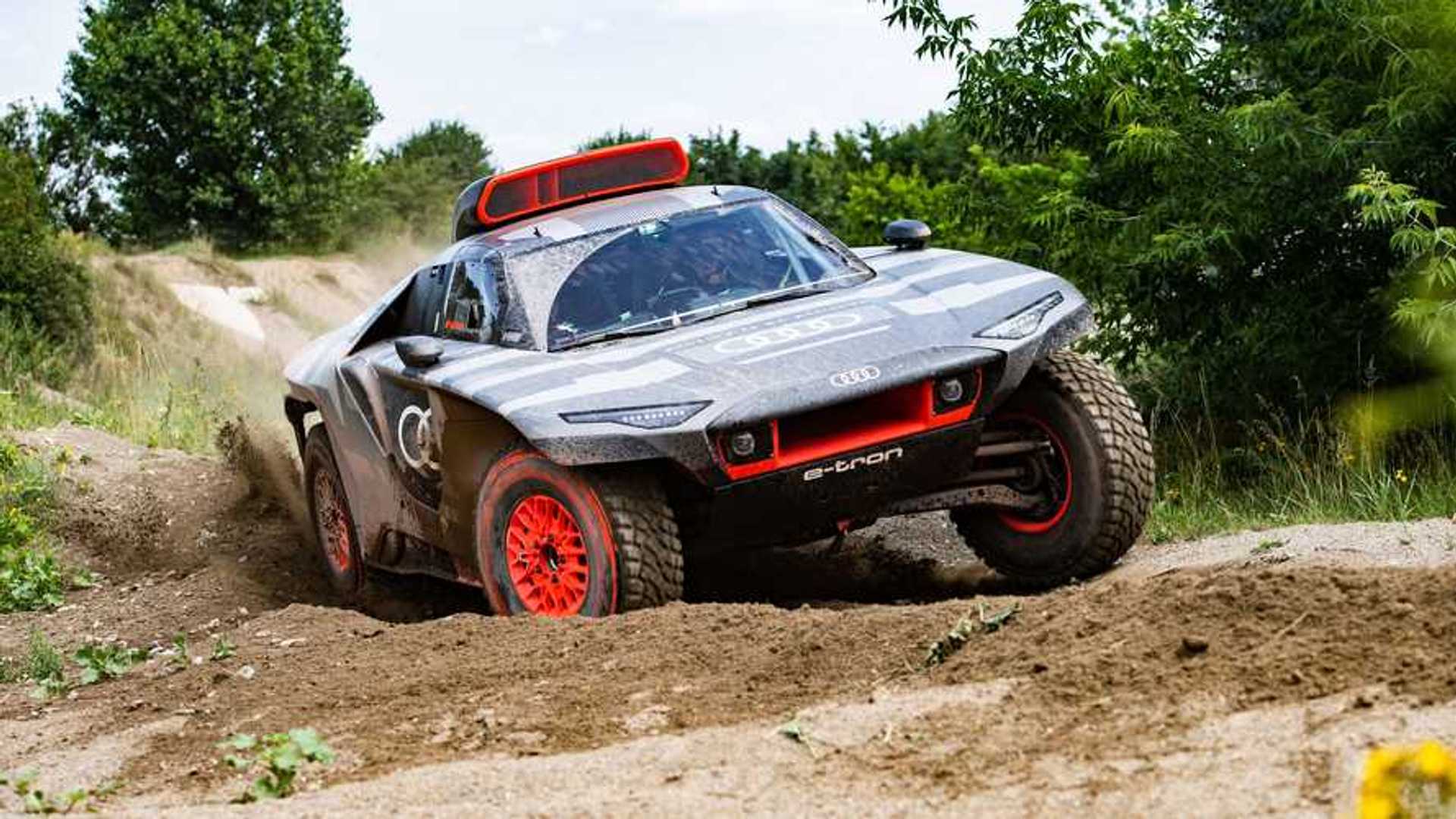 Here is the Audi RS Q e-tron, a hybrid SUV that Carlos Sainz, Stéphane Peterhansel and Mattias Ekström will have to polish over the next few months. participation in the Dakar in January 2022. As you can see, the look is quite spectacular, with an imposing silhouette and with good reason, as the model is 4.50 meters long, 2.30 meters wide (most under the new T1E regulations) and 1.95 meters high.

In front we find three thin strips of blue LEDs mounted on small white LED headlights. On the back, a red LED strip and the words “Future is attitude” complement the identity of the model, while also reflecting the future of the brand, which has clearly focused on electrifying its production models.

The hybrid powertrain is divided into several components. First up here is the MGU05 used in Formula E (250 kW and 33 kilograms) located above the front axle. Batteries with 13 modules of 266 cells (52 kWh and 375 kilograms) run from the tunnel between the driver and co-pilot and reach the sides.

We then find the 2.0-liter four-cylinder TFSI engine used in the DTM and powered by a 295-liter tank. The unit operates between 4,500 and 6,000 rpm to optimize fuel consumption and is connected to another MGU to charge the battery and recover energy during braking. The third MGU drives the rear wheels and is not mechanically connected to the front axle. This is a model that is still under development, weighing more than two tons, well over the minimum 2000 kilograms allowed by the regulation.

“Our drivers were very happy from the first minutes they spent in the car, even though we’ve already made a long list of things to do.”, said the project manager. “But we’re looking forward to this big challenge; we don’t want to make additions, we want to get the best results. Of course we know there will be a learning curve, that’s a car. The most complex race car we’ve ever made, even more complex than our LMP1. we want to follow in the footsteps of the legendary Audi Quattro in the rally. “

Three main challenges still await the brand: get closer to the lowest weight to meet regulations, achieve exemplary reliability, and improve software. The last point is important because the vehicle is equipped with advanced technologies and has more than four kilometers of cables. For the first time in a rally attack, wire telemetry was used to analyze vehicle behavior and high-voltage systems.

The Audi RS Q e-tron can be charged at the charging station. Audi Sport is working with Amaury Sport Organization, the organizer of the Dakar, to create recharging zones “environmentally friendly”. Ring company hopes to cooperate “one or two races” before joining the starting line of the Dakar Prologue, 1is January 2022.

TF1: PARTNER OF THE TF1 GROUP VIVIAN MAIER EXHIBITION AT THE LUXEMBOURG MUSEUM

TAS turns his back on Wade et Cie

Calculation of the size of the portable generators market 2021, analytical review, growth factors, development strategies of the main leaders, forecast until 2024 – thetfordactu.com