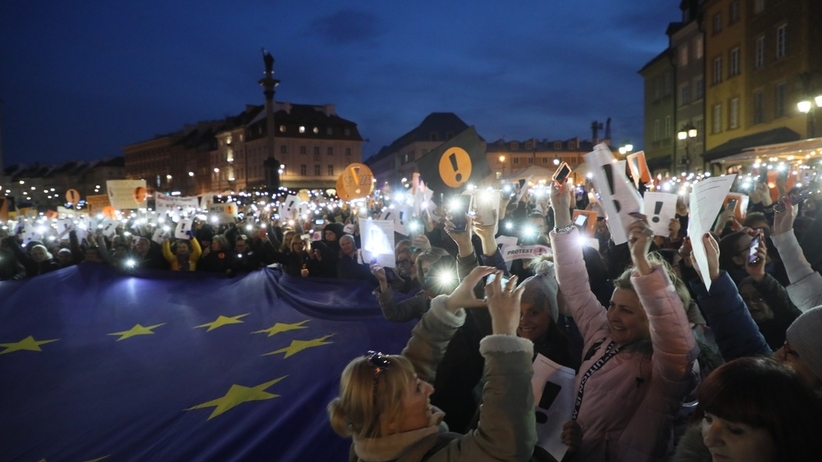 Thousands of people gathered on Friday in Grajski trg, under the slogan "Light with a call to the heavens," in a gesture of support for teachers who attacked. Teachers are fighting for our common goal, for the quality of education – said the President of Warsaw Rafał Trzaskowski during the rally.

Do you want to know everything first? Join the newsgroup ZET on Facebook

Thousands of disciples, teachers and parents illuminated lights and lamps that were directed towards the sky in a gesture of support. The slogans "Here Belfer has rights, here Warsaw is free", "We are with you, with teachers" or "Education, democracy".

The first speaker was the President of the Warsaw Rafał Trzaskowski. He announced that the city's central government would do everything to make the money that was not paid to teachers in salaries "returned to school and paid in the form of allowances". He said that teachers "are fighting for our common goal, fighting for the quality of education and for the quality of society".

At the same time, Trzaskowski emphasized that while the education and organization of exams is the responsibility of the government, as local officials, "the capital authorities (PAP) in their head, where the government is ineffective, take on a certain responsibility."

Representative of the Polish Teachers Association Sławomir Broniarz said during the demonstration that the protest, which lasts for 5 days, is a victim not only of teachers, but also of the administration and the entire school service.

We know how many teachers, how much this housekeeper will be, the cleaner, the cook will lose because of this strike. We will do everything to replace it at least partially. "

He also emphasized that "the union leadership decided not to execute the strike and not to end strikes".

The PNA leader reported that the account specifically created for support has already PLN 2,200,000. Among the people who make donations to teachers, Broniarz among other things mentioned players, judges, directors or writers.

The funds collected will be for attackers who do not belong to the trade unions. "This is 400,000 people who have trusted us, who bet and need support. Trade unions will have to cope with their means," he stressed.

Pupils and parents thanked teachers for the effort they invested in education and showed understanding and support. "We are fighting and we will achieve our common goal – teachers and students" – said middle-class student Jakub Borkowski.

Demonstrations and demonstrations supporting teachers are taking place throughout Poland on Thursday. Today, in Katowice, "Light with a call for teachers". Yesterday, similar events took place in Poznań, Wroclaw, Opole and Toruń. Gdansk, Gorzów Wielkopolski and Bytom on Saturday announce "The Light".