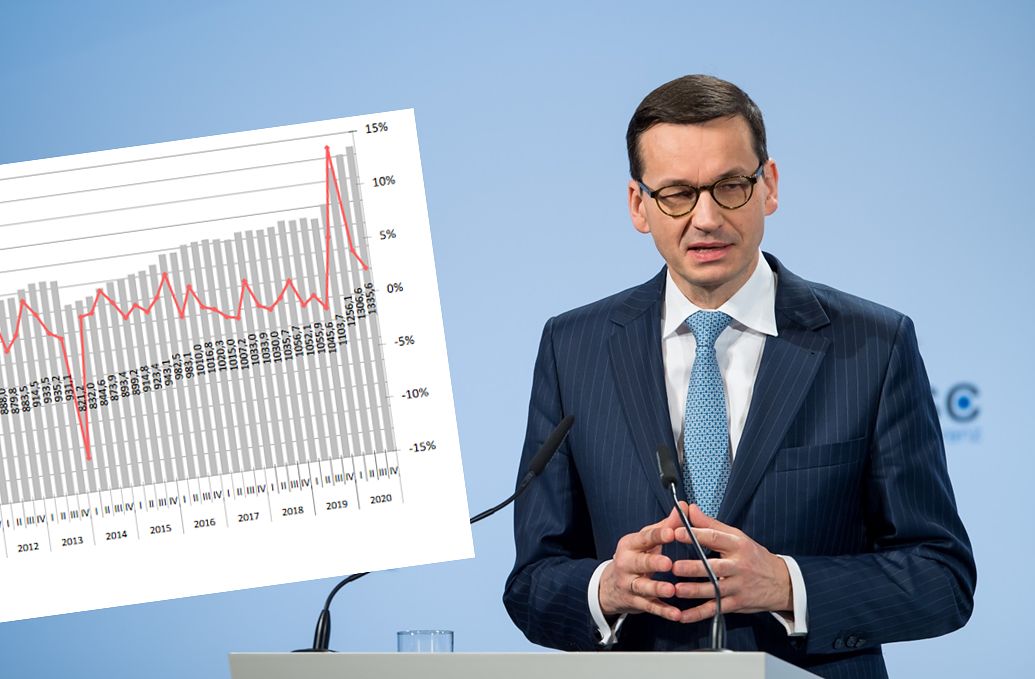 In 2020, Poland’s public debt increased by almost PLN 290 billion, ie by approximately PLN 7.6 thousand. PLN per one Pole (without exception from children to the oldest). Of this, almost 165 billion PLN or about 4.3 thousand. PLN per capita was used to combat the effects of the pandemic: the financial shield of the Polish Development Fund and the Fund to Combat COVID-19.

Is that a lot? The increase in debt is much larger than in 2019, when the debt increased by less than PLN 10 billion, ie by PLN 300 per capita.

At the end of 2020, Poland’s total debt increased to PLN 1,335.6 billion. These data are calculated according to the so-called EU Methodology, ie the most reliable. That gives about 34.8 thousand. PLN in the sense of one Pole.

See also: Will the lock affect Polish finances? Kościński: We took on the task of having a financial cushion

Public debt is also given in terms of gross domestic product. At the end of 2020, the debt of the public finance sector amounted to 57.5 percent. GDP, based on a preliminary estimate by the Central Statistical Office. That means it increased by more than 12 percent last year. GDP.

As Finance Minister Tadeusz Kościński pointed out, the increase in debt was mainly due to the start of activities to support companies and employees in the difficult times of the pandemic on an extraordinary scale. For this purpose, the state had to borrow money.

However, Sławomir Dudek, chief economist of FOR, points out that not all funds from the COVID-19 Anti-Utilization Fund have been allocated to combat the effects of the pandemic. Some, for example, went to fund so-called local government checks, which was an election promise and was further distributed according to very secret criteria.

On Thursday, we also learned estimates of the general government deficit in 2020, which turned out to be lower than forecast and amounted to 6.9 percent. GDP. Is that a lot?

– & nbsp The deficit is large if we do not consider any context. However, given the context of the first recession in the Polish economy in 30 years, the deficit is moderate compared to other countries. And despite the fact that the volume of state aid, especially in the first three months after the outbreak of the pandemic, was large in Poland, Jakub Sawulski, head of the macroeconomic group at the Polish Economic Institute, told & nbspmoney. .pl.

The deficit is the difference between general government expenditure and revenue in a given year. This difference can be expressed as a percentage of gross domestic product.

The deficit in & nbsp2020 turned out to be lower, among other things, due to a shallower recession. Not only that. – & nbsp Inflation is also an important factor, which did not subside despite the recession in & nbsppolsko and is the highest in & nbspUE. Inflation contributed to budget revenues and increased the denominator, because the deficit was calculated relative to GDP and there was no recession relative to nominal GDP, we increased by 1.3%. – & nbspsprip in an interview with & nbspmoney.pl Sławomir Dudek.

Economists unanimously point out that public debt has risen much more than the deficit alone. And it’s not just about the impact of exchange rate differences. Simply put, in 2020 we have already “progressed” for the needs of 2021.

– The Ministry of Finance took advantage of the fact that last year it was quite easy to sell this debt to the financial markets at fairly low interest rates – & nbsp says Jakub Sawulski from & nbspPIE.

Therefore, we will have to assess the state of public finances in two years’ time. The epidemic continues and we have additional costs. The chief economist of FOR points out that many budget expenditures have been postponed to 2021. For example, in the Social Security Fund, we have a surplus in a crisis year to be able to take into account future costs. So we can talk about a two-year budget.

Poland’s public debt at the end of 2020 amounts to the already mentioned 1 trillion 335.6 billion PLN. This is called general government debt or EDP, ie the amount calculated according to the EU methodology, which gives the most complete and reliable picture of Polish debt and shows how much it costs to fight the effects of the COVID-19 pandemic.

There is another, smaller debt, the state public debt (PDP). At the end of last year, it amounted to PLN 1 and PLN 111.3 billion, which is PLN 1 billion less. Where does that difference come from?

As can be seen from the graph below, the gap between public debt and debt calculated according to the EU methodology increased significantly last year. This is because the debt from the COVID-19 Anti-Funding Fund (almost PLN 100 billion) and the PFR Shield (PLN 65 billion) were “pushed” beyond the national public debt.

This is not to say that public debt was dormant last year. On the contrary – it increased by PLN 120 billion, which is much more than in 2019, when the increase was less than PLN 7 billion.

– The year 2020 is “five PiS”. These expenses were not covered by income and led to an increase in debt. 500+ for each child or 13 retirement pensions is ten billion zlotys that had no income coverage. Only now the government is raising taxes – says Sławomir Dudek.

Despite arguments that an increase in public debt is a lesser evil than, say, the black scenario in the labor market, government indebtedness raises a lot of emotion. This is due, for example, to the awareness that we owe it to future generations. We are now borrowing money, but the burden of these obligations will be felt by our children and grandchildren.

Koreans are investing in Silesia. There they create their largest factory