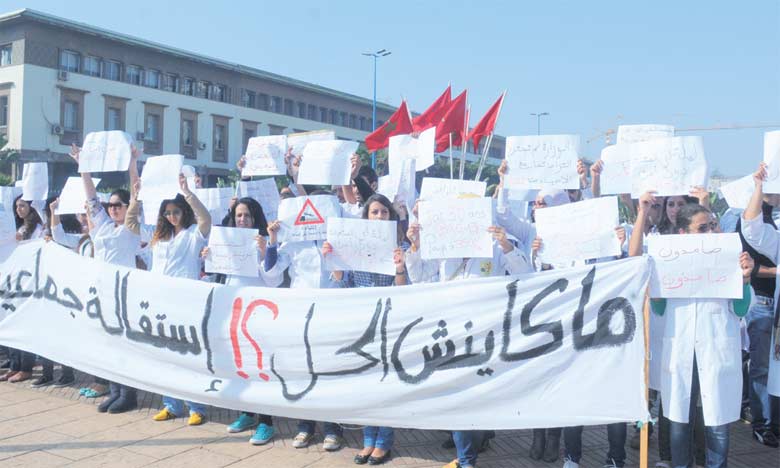 On Thursday and Friday, a new strike is announced in public health facilities. The interruption of work will concern all public health institutions in the Kingdom, with the exception of essential and vital services. Organized on the invitation of the Independent Public Health Association, this event will also be accompanied by a series of protests planned in the fourth phase of the fight for doctors to complete their claims.

After an attack last Monday, doctors, pharmacists and dentists in the public sector called for a new strike on Thursday and Friday. Therefore, all public institutions will be paralyzed, with the exception of essential and vital services. This two-day strike, which will be taken into account at the invitation of the Independent Public Health Association, will represent the second strike organized in a week. Doctors are upset and do not hide. Although white coats face health minister Anaso Doukkali, they do not oppose the continuation of the protest and multiply attacks to draw attention to their claim.
According to Alawi Montadar, president of the Independent Association of Public Health Physicians, these three sentences are part of the fourth phase of a medical fight to obtain their demands. During this period, it will be necessary to continue collecting collective redundancies together with an organization that will be next Wednesday on the day of mourning, which will be marked by the dressing of a black blouse by doctors.
Doctors will also, as doctors say, continue the boycott of some services, such as forensic autopsies and campaigns to attend a medical school due to the absence of a minimum threshold of health conditions and the success of this operation, Montadar says. A continuation of the boycott of non-medical tasks is also planned. According to Mr Montadar, these various forms of protest reflect the crisis situation in the health sector in Morocco and rising inconveniences among experts. Regarding the demands of doctors in the public sector, they focus on improving reception and working conditions by providing hospitals with the equipment and logistical resources needed to better treat emergency cases and better control over patients. as well as the granting of equivalence between the doctorate of medicine and the doctorate of the state. A measure that will allow doctors to benefit from the Wage Index 509 and move on a salary scale. Finally, physicians require an improvement in their social conditions.

The asteroid will graze the earth

Closing the pools during the spring break: hoteliers in a rage