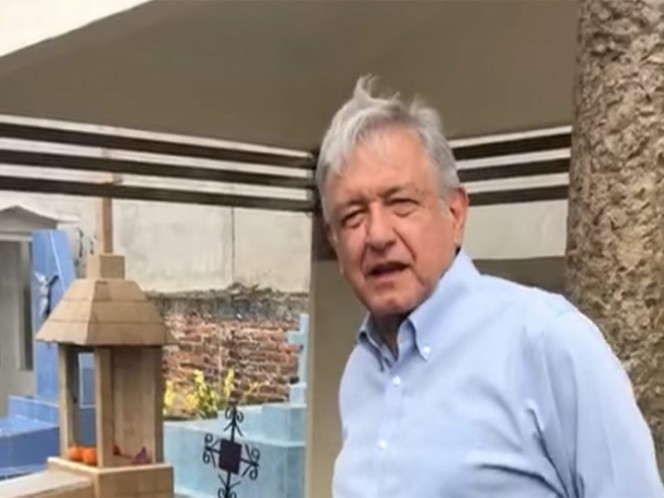 President Andrew Manuel López Obrador, Mexico, has said today that he will be responsible for "helping people, our beloved people in Tabasco and Mexico".

Mexico's elected president, Andrés Manuel López Obrador, who said today that he was adjusting to the circumstances, "helping people, the dear Tabasco and the people of Mexico".

Tabasqueño arrived this morning at Villahermosa's Central Pantheon to visit his parents and brother's tombs to go to the Recinto Memorial to do the same with his former wife.

The day of the dead, a tradition that must be preserved: López Obrador

López Obrador gave two messages in each cemetery and before his parents' crypt, Andrés López Ramón and Manuela Obrador González and his brother José Ramón; He told us that there was time for it, because we must not forget our "dreams," this is a tradition, it is ours, we are Mexican. "

He explained with a smile, not to forget where we came from and to follow tradition; "Happy month, beginning with the saints and ending with Saint Andrew."

At the moment of retirement, a lady with a tamal hand, called "maneas", was expected to offer them to the elected president.

Andrés, I'm waiting for you, "he said, and drew his attention. López Obrador smiled at him accepting the gift when he exclaimed: "¡maña! Manea only in Tabasco!"

Then in the memorial house of his former wife, Rocío Beltran's grave, he stated that his visit "to my late wife who helped me in the most difficult moments and paid tribute to all the deceased, all our relatives who were standing in front of us."

Where are they, they said they were with us; "Today, we are happy and always align with the 100's, helping people, dear Tabasco and Mexicans."

At both cemeteries, both at their arrival and at retirement, the elected president welcomed dozens of people who welcomed him and made a picture of him.

López Obrador refused to comment on any issue such as the withdrawal of the Texcoco airport project; "Today is the day of the deceased," he said.