Merdeka.com – Trans Public road from Merak port, Banten to Surabaya, Eastern Java will open in December 2018. This can be a boost to "breaking eggs" in a large infrastructure of design.

This is called the "breaking of eggs", because the project of the motorway with a total length of 1150 kilometers began 22 years ago or 1996.

This uninterrupted toll road from the west to the most eastern side of Java has long been predicted as an infrastructure megaproject in Java to facilitate human connectivity and logistics flows of goods and services.

The development, which began from the time of the new era, was often hampered by many things. As a change of policies due to the change of the government regime, the search for investors who are truly committed to building is not only an investor who is looking for rent, but also a classic problem, namely the acquisition of land. They are quoted from ANTARA.

During President Joko Widodo-Jusuf Kall, Trans Java Road was one of the priority development programs. The President called on Merak to join the toll in Surabaya, and can use it publicly in December 2018.

The BUMN Ministry has requested the BUMN responsible for the development of toll infrastructure, such as PT Jasa Marga Persero Tbk and PT Waskita Karya Persero Tbk, which would work together to end the trans-dormant development of Trans Java.

Efforts to discontinue stagnation include addressing the issue of liberation in cooperation with the State Agency for Land and Local Authorities and the issuance of alternative schemes to find funds on the capital market. Since the beginning of November 2018, the Trans Java Toll Road network for Merak to Surabaya has reached 95 percent.

At the end of November 2018, the construction and management of permits for the execution of the department is planned, so that by December 2018, the general public can already be used.

BUMN Minister Rini Sumarno on Monday (12/11), before using the general public last week, tried to examine the Trans Java road from Surabaya to Jakarta which is a total of 796 km.

The ongoing process for the Surabaya-Jakarta toll road, including the location of the Kenteng Kali bridge, the Salatiga-Kartasura toll section, is part of the Semarang-Solo toll.

There are still some of the finishing works in this chapter, especially related to slopes and derivative works with and to relatively steep bridges.

If these "critical" sections have worked, the journey time across the "Trans Java" will be greatly reduced.

As an illustration, Rini and Trans Java Toll Road Expedition started their journey from Warugunung Road, Surabaya on Monday (12/11), at 06.00 WIB and arrived in the Kenteng River, which was about 274 kilometers in about four hours. If it is on the national road, the distance of Surabaya-Solo must be taken up to seven hours.

At the beginning of November 2018, settlement is also carried out on the Kalikuto bridge, which is part of the Semarang Batang roadway.

Kalikuto Bridge has a unique design that will become the Trans Java icon. The journey time from Surabaya to Kalikuto is only five hours 30 minutes from the usual time of 9-10 hours.

However, there is another problem in the Trans Java Toll network, which is a major downtime in Jakarta-Cikampek (Japek).

In the Trans Java Toll Road expedition on Monday (12/11), the high congestion in Japeke stagnated for up to two hours. Although the journey from Surabaya to Cikampek was very smooth. It seemed that this heavy congestion in Japeke reduced the positive impression of a smooth trip to Surabaya-Cikampek.

After crossing the Surabaya-Cikampek toll, including the transition to the congestion at Japek, the Trans-Javasian expedition group for passenger transport landed in Jakarta with a journey time of 14 hours. 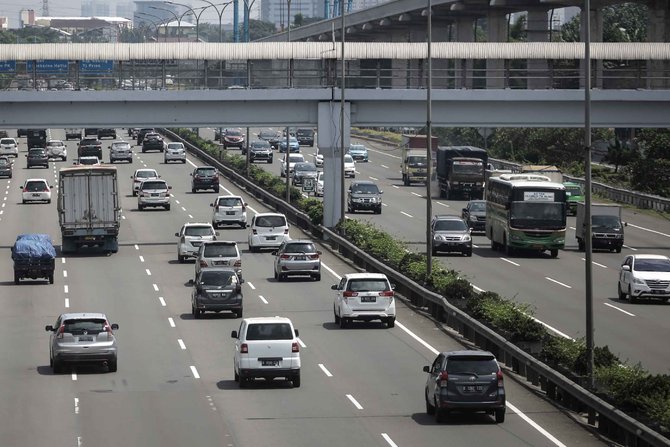 If Trans Java is fully operational and congestion in Japan is resolved, Rini is optimistic that it can reach Jakarta-Surabaya train station within 9-10 hours.

One solution, prepared to overcome congestion in Japek, is the construction of a floating road road (Japek Elevated), which aims to complete in April 2019.

Since August 2018, 42 percent of the construction of Japek was realized. Another solution is the extension of existing toll roads for the Japek toll road.

In the business world, it is expected that shorter travel time will reduce operating costs in order to increase business expansion.

"In one day, logistics operators can send their fleets with this toll, not just for one departure," said Jase Marge Desy Arryani, managing director, who manages 12 sections of the 19 toll roads of Trans Java.

With the immediate implementation of trans Java, the central government and city or county governments crossed toll roads must respond. Trans Java Road will be across five provinces, 15 cities and 21 districts. When the Trans Java connection is connected, the wheels of the Java economy will change.

Trans Java needs to be linked to economic resources in the region, such as micro, small and medium-sized enterprises, industrial estates, ports, airports, resorts and tourist areas. In this way, Trans Java Road will be able to stimulate regional economic growth and optimally benefit the surrounding community.

If this is ignored, the area will only be a transit point. The idea of ​​developing infrastructure for prosperity that is evenly distributed in all regions can not be achieved.

The existence of a place to rest along Trans Jave should also be used as a promotional window for the MSME and the tourism sector.

In this case, central and regional authorities need to strengthen cooperation. The role of regional governments is needed to identify potential MSMEs and tourism in their regions. The existence of the trans-public toll road network should stimulate local revenues and increase productivity in the region. [ian]