Excavations in distant Patagonia, Argentina, have revealed a new species of dinosaur whose name matches what we know of it so far. Llukalkan aliocranianus ali „the one that causes fear”He was as long as an elephant, he had an extremely strong bite, very sharp teeth and huge toenails to be able to grab his prey. He lived about 80 million years ago, at the time of the Cretaceous, at the same time as the famous tyrannosaurus Rex.

While tyrannosaurs ruled in the northern hemisphere, the southern hemisphere was dominated by the abelissaurids to which this family belongs. L. aliocranianus smelled better and had much better hearing than the other nine species in the family.

The short arms of the abelis were similar to those of T. rexa, but their skulls were unusually small and large in height, with horns and bulges.

These dinosaurs were still researching their evolutionary choices and changing very quickly just before they became extinct. – Ariel Mendez, paleontologist

The fossil revealed a skull with a unique feature that set it apart from other abelis, a small cavity in the ear believed to offer hearing like that of crocodiles, and L. aliocranianus gave it a competitive advantage, making it one of the most dangerous carnivorous dinosaurs. of that time. 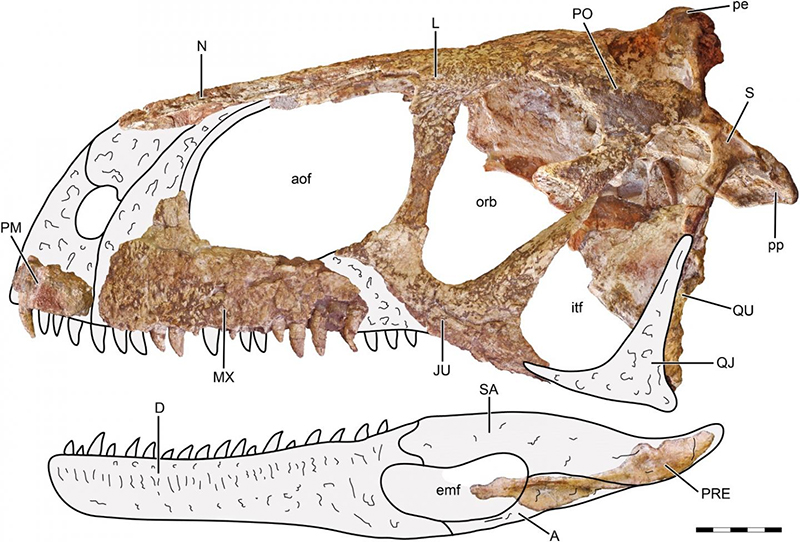 The research was published in the Journal of Vertebrate Paleontology.