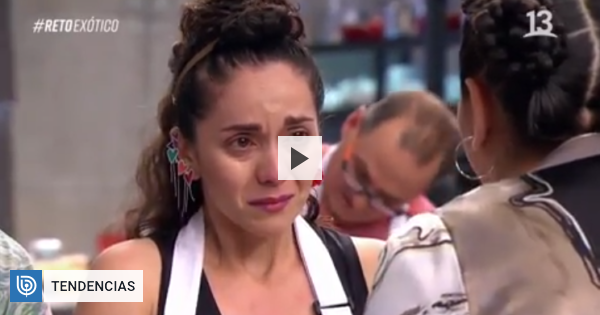 This Friday is a new test in the Stellar Chef, in which participants had to cook a snail in order to avoid the challenge of elimination. This situation led to one of the competitors, Karen, it will be interrupted again, because it will have to kill a living being.

The 33-year-old also reiterated that he would not be able to kill the mollusk, although he is aware of eating meat, so he went into tears before the start of the test.

Without continuing, the competitor himself suggested to the judges of the competition we are going directly to the challenge to end the following week, option that was last declined.

Because of this reaction Karen harshly criticized two of her classmates: Diana and Giovanni, who have shown that her crying is not suitable for someone who wants to be a cook.

However, she was the most difficult Barbara to claim to be her partner "This has to be resolved quickly" program for "non-preparedness and irrelevance".

On the other hand, there were also postulants who helped young women, such as Fidelina, Lautaro and chef Fernandes Fuentes; but she frankly refused.

Finally, the girl managed to complete the preparation, although she did not like the three jurors.

One thing is that Karen has created various criticisms among the supporters of space in social networks. Many have stated this his crying was "exaggerated".

#Exotic Challenge I do not kill living beings, but I like karen pic.twitter.com/6lwDCx0NsX

#retoexotico With all due respect to those with a housewife Karen's concert show, she cried like a crying girl in Turkish malls. pic.twitter.com/aTCkmSqxFQ

#Exotic Challenge chef: Karen, how are you cooking a snail?
Karen: I cooked it in 3 liters of crocodile tears pic.twitter.com/c9ZI3pFRlG

I would like Karen to look at the snail, Karen looked at him, and the snail would tell him …
Asesiiiinaaaaaaa?#Exotic Challenge pic.twitter.com/3qbYLGZXKb

When I see Karen's dish, she asked me why she cried so much? Why did he show so much? How pathetic to spend half the crying #Exotic Challenge #MasterChefChile pic.twitter.com/h4qRij0Q8a

Karen's reaction to … whatever it is pic.twitter.com/Ns7tT6TtFP