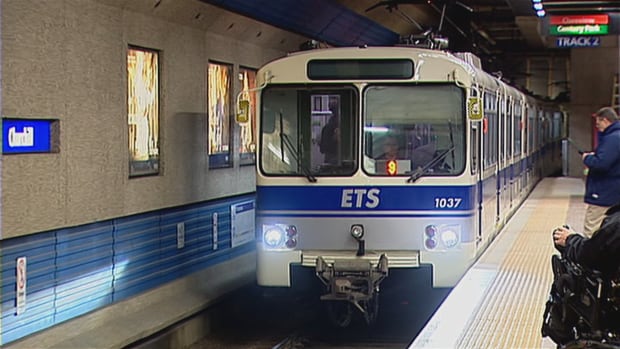 The Edmonton transit system is plagued by inconsistent, outdated and "almost unusable" signs that make it difficult to navigate, according to a report heading to city councilors next week.

The Edmonton Transit Service Advisory Board prepared an analysis of the wayfinding designs used throughout the transit system, from LRT landmarks to maps on buses.

The report outlines 21 issues with the way people expect to navigate the city's transit network.

The centralized maps on some LRT station platforms, meanwhile, are "very nearly unusable," the report said. The maps do not offer the direction, schedule or frequency of trains and buses.

The report outlined specific shortcomings at Churchill station, the downtown hub for thousands of daily commuters. It called the lack of landmarks and recognizable ETS signs indicating street-level access to Churchill Station "remarkable".

"There is zero indication, when you are at the City Center Mall entrance, at the Plaza on Sir Winston Churchill Square, or anywhere near the intersection of 100th Street and 102nd Avenue that there is an access LRT station nearby," the report noted.

The two street-level entrances at each end of Churchill Square are unaccessible for people with limited mobility, yet offer no direction to the nearby accessible entrances. The report noted that the universally accessible entrances, outside the Winspear Center and Chancery Hall, were hard to find, "bleak and unwelcoming".

When it comes to actually using the LRT without having a phone, you're done. There is no navigation system whatsoever.– Ryley Melville

Ryley Melville has been using the LRT from Churchill station almost every day for the last four years. Melville said she has lost count of the number of times Google Maps helped her find the way in the absence of transit wayfinding.

"When it comes to actually using the LRT without having a phone, you're done. There's no navigation system whatsoever," she said.

"I do not even look at them anymore," Melville said.

The signs for the bus coming out of the Churchill LRT offer no indication of the bus direction or route.

The report also offers suggestions for ways the city can improve transit wayfinding. It suggests installing consistent and identifiable ETS branded landmarks at bus stops and LRT entrances, pointing to the famous London Underground logo at the entrances to the subway in the U.K. capital as an example.

The report suggested that almost unusable maps in LRT stations could be upgraded to interactive displays with real-time schedule updates and trip planning information. But, more broadly, it calls on the city to install maps with clear directions at LRT stations and bus stops, rather than small signs often strapped to poles displaying numbered routes without indicating direction or destination.

Farhan Ali said that kind of wayfinding would have helped him when he first arrived in Edmonton from Dubai just over a year ago. But he said he was struggling to navigate the bus network and would often end up on a northbound bus when he wanted to go south, or vice versa.

"It's not prominent," he said. "There should be proper signage." 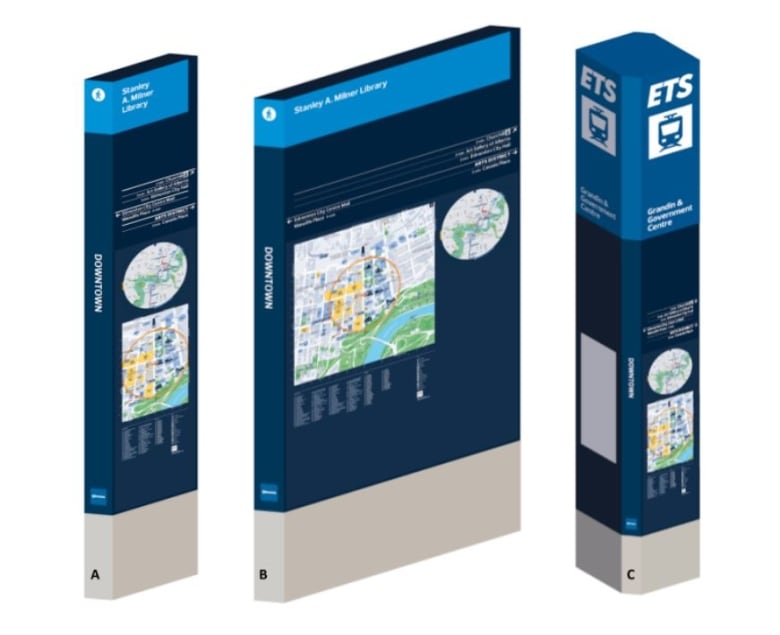 The city has started to install permanent roadfinders around the city, including a post intended to indicate entrances to transit stations. (City of Edmonton)

The report provides two broad recommendations to guide future efforts to update the transit wayfinding. First, it adopts consistent and predictable wayfinding practices that apply to the entire transit system. Second, to adopt a universal design policy, to make sure signs and maps are designed with vulnerable users in mind.

The city started developing a city-wide wayfinding strategy back in 2013 with consistent design standards. The five years of planning began to bear fruit last year as the city installed the first permanent wayfinding signs in parts of Downtown and Old Strathcona based on the design.

The Advisory Board's report is scheduled to be discussed at the city's urban planning committee on Tuesday.