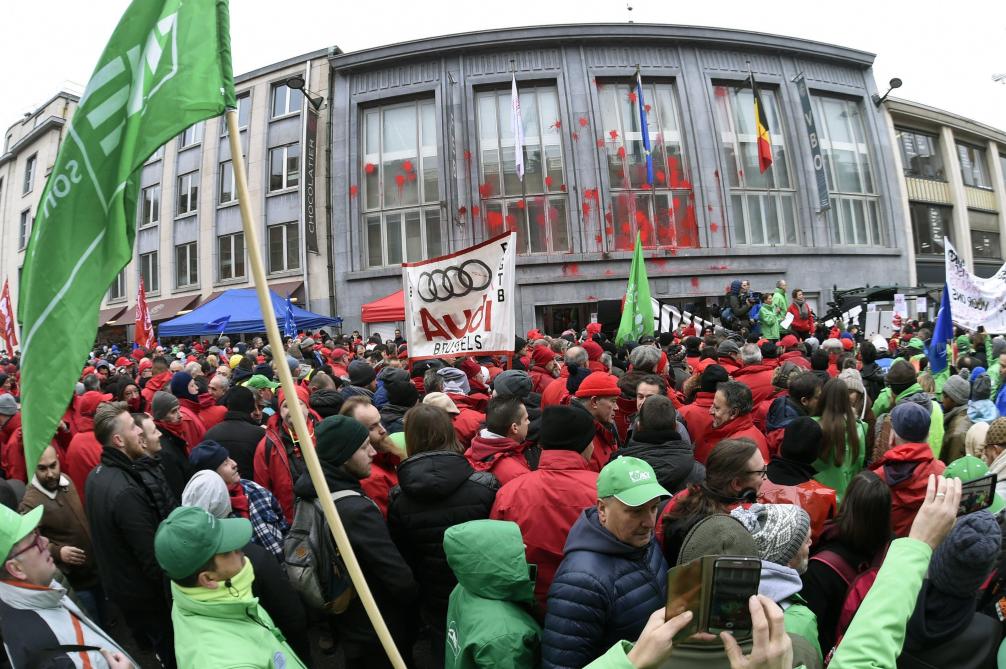 Due to the failure of the wage negotiations with employers, trade unions chose Wednesday, February 13, to organize a national strike.

The trade unions announced a national strike on February 13 due to the failure to negotiate wages. Trade unions demand higher wages, higher incomes and pensions, better conditions for ending a career, and better opportunities for combining work and private life.

► According to Kris Peeters, trade unions leave the negotiating table too early

In addition to indexing, Conseil Central de l'Economie has determined the rate of wage growth of 0.8%. In the eyes of trade unions this margin is insufficient.

The local and regional government CGSP will participate in the national strike on 13 February, organized as a common front of trade unions. According to the trade union, the effect on services rendered will be "quite delicate".

Both SNCB, Tec, Stib and De Lijn were invited to withdraw. The strike, accepted by the union, which is a common front CSC-FGTB-CGSLB, will be from February 12 at 22:00 to 13 February. However, SNCB will set up a minimum service as defined by law now.

► The item will affect all public transport

In the Belgian sky, airplanes will be scarce, with a strike notification sent to the Skeyes (former Belgocontrol) air traffic control company. The Christian Union also filed another notice of an attack on Skeyes: the actions could have taken place since February 23rd.

In the meantime, Brussels Airlines has removed all of its flights (222) scheduled for the day strike, thus changing the plans of more than 16,000 passengers. Other companies of the Lufthansa Group (Lufthansa, Swiss, Austrian Airlines, Eurowings) have not yet taken any decisions regarding flights that took place on and from 13 February to and from Belgium. Flights to TUI will be redirected to Lille, Orly, Maastricht, Eindhoven or Amsterdam.

Those who handle luggage at various airports will cross their hands.

There's no call to attack the bpost

Trade unions in the battalion lodged a notice of a strike for the national strike on 13 February, but do not require strikes.

"The strike notification is filed so that anyone who wants to participate"
, explains Jean-Pierre Nijns of the CGSP Flemish wing.
"However, we will not specifically request strike questions for the Bpost."

Nevertheless, mail distribution needs to be discontinued, such as collection of waste.

Guards will be organized at Charleroi in front of the shopping centers of Ville 2, City Nord and for the first time on Rive Gauche, the unions have announced that they have reviewed the mobilization on the common front.

► Airport, shopping centers, bpost …: the impact of the strike on February 13 is the largest in Charleroi

Cramps, diarrhea, fever …: be careful if you shop at Cora, the store and Afsca will recall the product! – Sudinfo.be

Quebecers are looking forward to ending restrictions in New Brunswick

Should we be concerned about differences in hospital mortality rates between Flanders, Wallonia and Brussels? Shade is essential