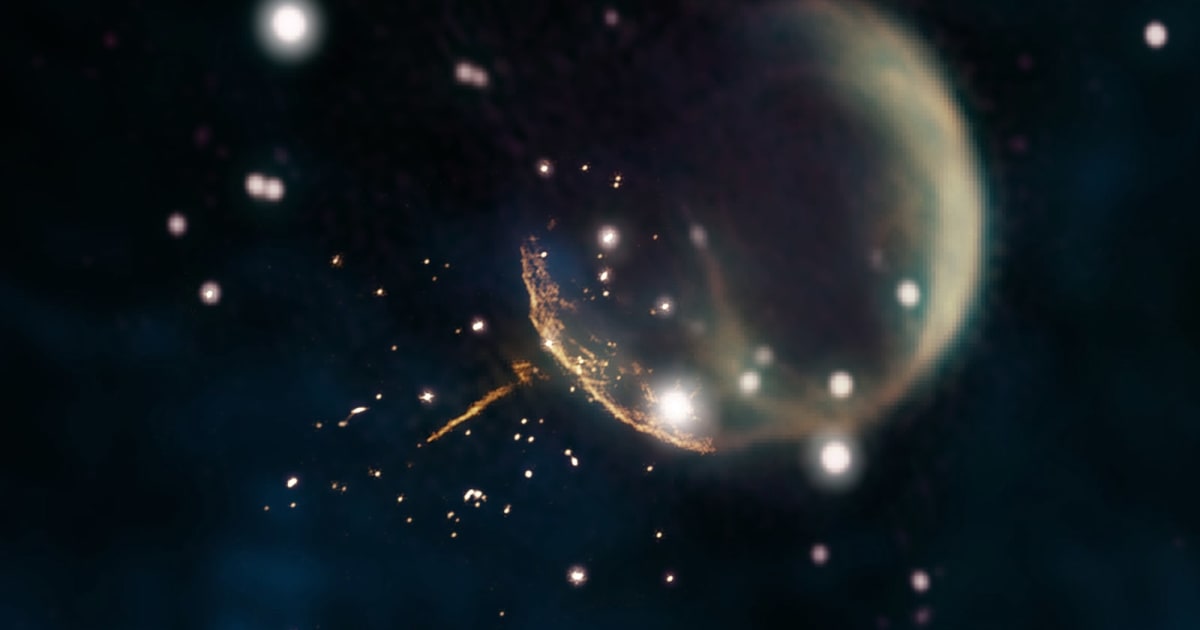 Pulsars are super-neutron stars formed from massive supernovae. We find them only if their electromagnetic rays show directly to the Earth as a nuclear powered lantern. It has been found that the pulsars rotate as fast as 1.6 milliseconds or 38,500 rpm. They take the angular momentum of the massive stars that have shaped them, but they are a fraction of the size. This changes to the speed of rotation, as well as the skates rotate faster when they pull their hands.

J0002, located approximately 6,500 light years in Cassiopeia, is not as fast. However, it spins at healthy 8.7 times per second every time it produces a gamma ray explosion seen from Earth. Astronomers at Einstein @ Home were spotted in 2017 while investigating gamma ray data using computer cycles borrowed from volunteers. The above photograph consists of older images from the DRAO observatory and new observations from the VLA. The latter shows the orange pulsar tail and the curved edge of the supernova remnant.

Scientists are not sure why the J0002 is moving faster than 99 percent of the measured pulsars. One of the theories is that the falling star that formed it had regions of a dense substance that pulled out a newly formed neutron star as a "gravitational puller". Shortly after it was formed, the supernova shell exceeded the pulsar, but the interstellar gas eventually slowed down relatively rare residues. Pulsar acted as a cannon ball, pierced the remains and escaped about 5000 years after the explosion.

The Pulsar J0002 will eventually escape from our galaxy. It's enough to say that you do not want to be on the go – such objects are very small (on average 12 miles), but they can weigh twice as much as our sun. At 2.5 million MPH, we could travel from Earth to the Moon in just six minutes. At a certain point it can be cooled to the point that it can no longer be detected – fortunately, thanks to the built-in arrow, we will always know exactly where it is going.